Hey everybody! Just FYI, I think I finally have my ad slots set up close enough to how I like them to offer them to you for direct sales on a CPM basis! There are some larger slots available for the same price as smaller ones in the old design — 970 x 250 images that would look great if you were advertising, say, a comic of some sort (HINT, HINT). To get started, head on over to my BuySellAds page, and feel free to email me with any questions. Advertisers who buy through BuySellAds get exclusive shoutouts in weekly metaposts like this one!

Speaking of advertising and the avoiding thereof, I want to give a shoutout to everyone who signed up to be a Comics Curmudgeon Supporter and get access to the banner-ad-free version of the site. (Supporters still see text shoutouts in posts like this, if there are any.) Those of you who signed up in the days right after we launched the redesign should now be getting charged for your second month of membership — as ever, let me know if you’re encountering any technical difficulties. Faithful web designer Adam Norwood and I are still plotting a few design tweaks but I thought I’d give you a peek of some ad-free screenshots to see how the site experience is different for subscribers. Here’s the site front page: 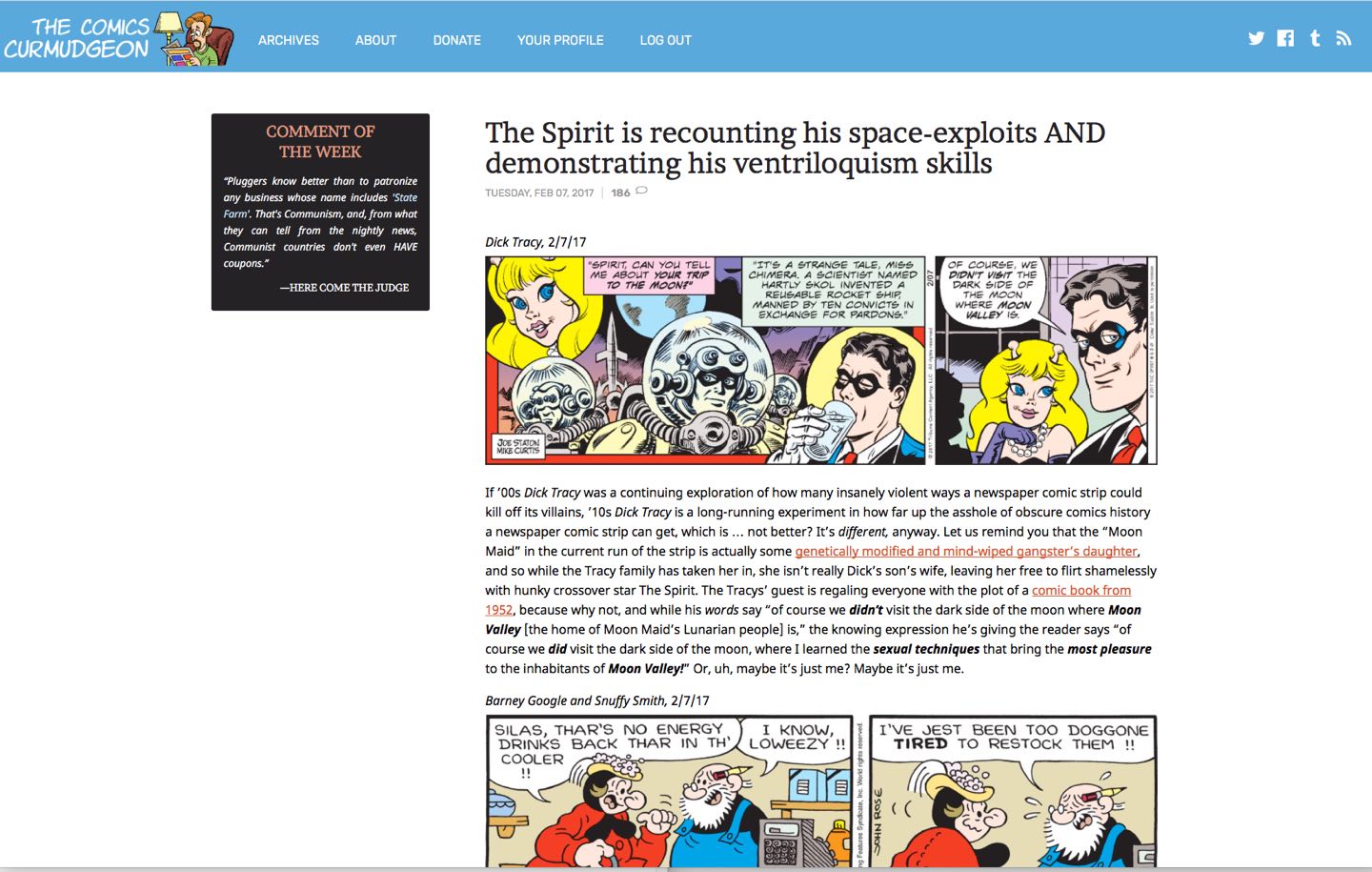 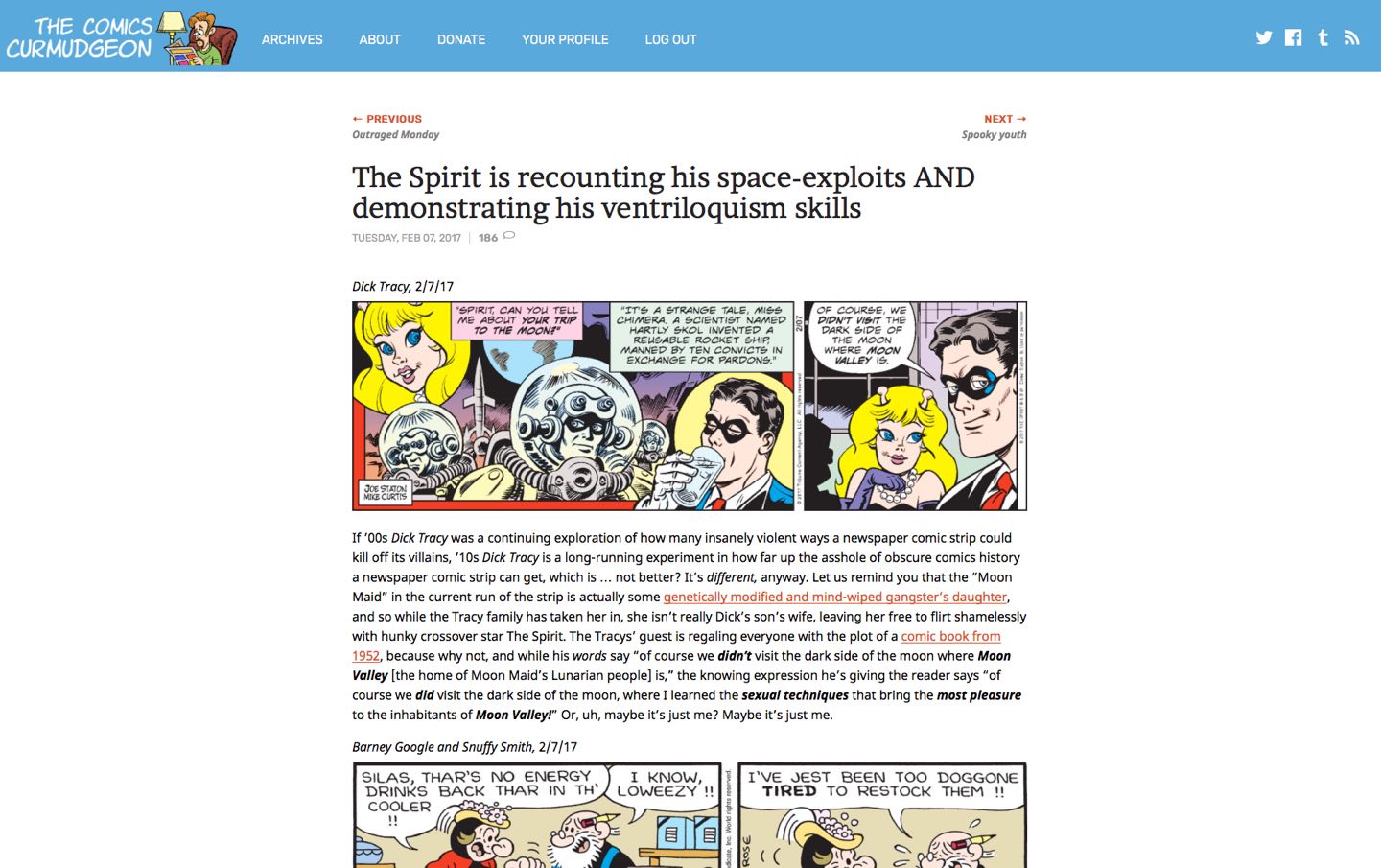 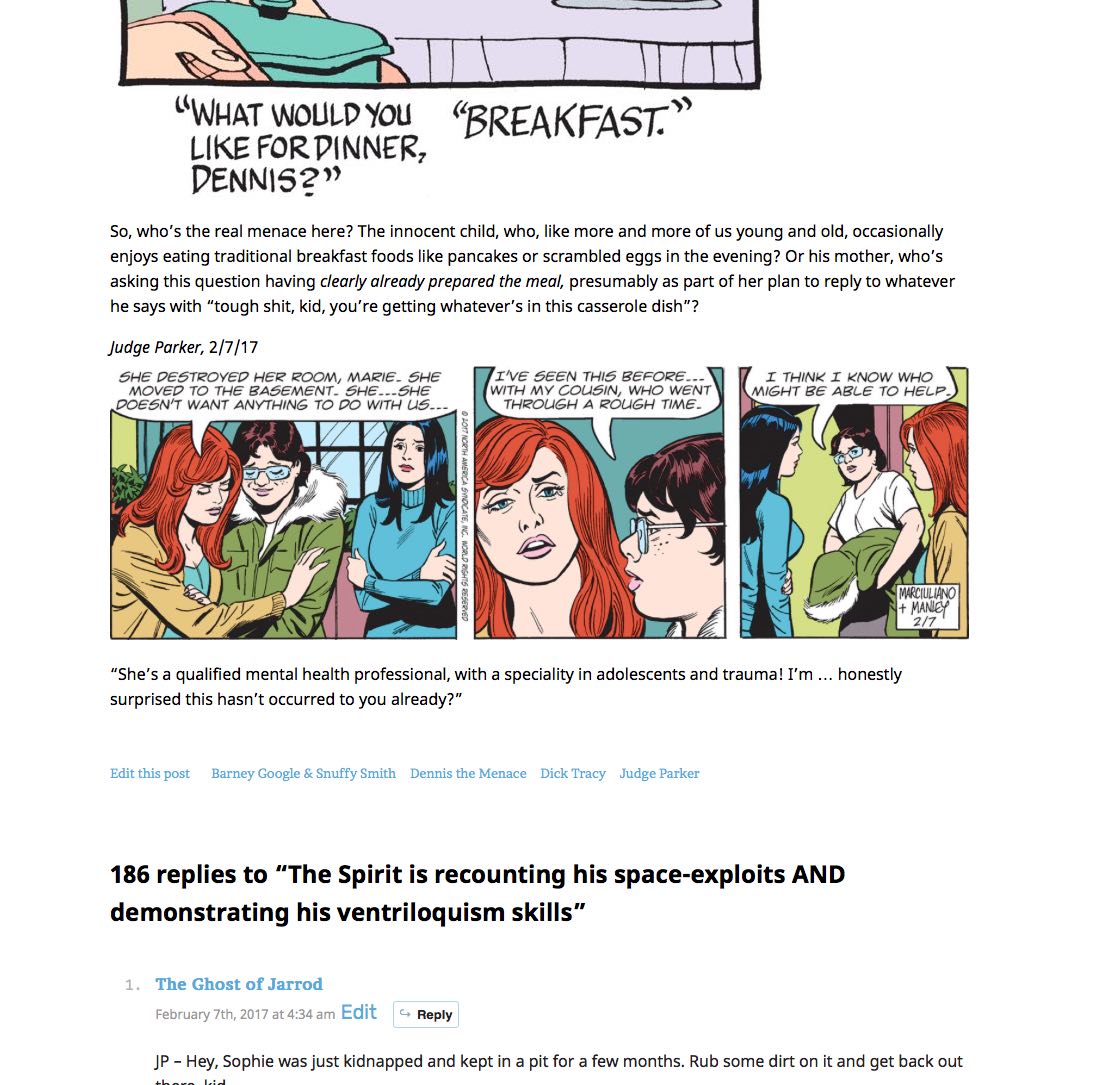 Here’s some screenshots of the site on mobile — the front page, and just above the comments on an individual post page: 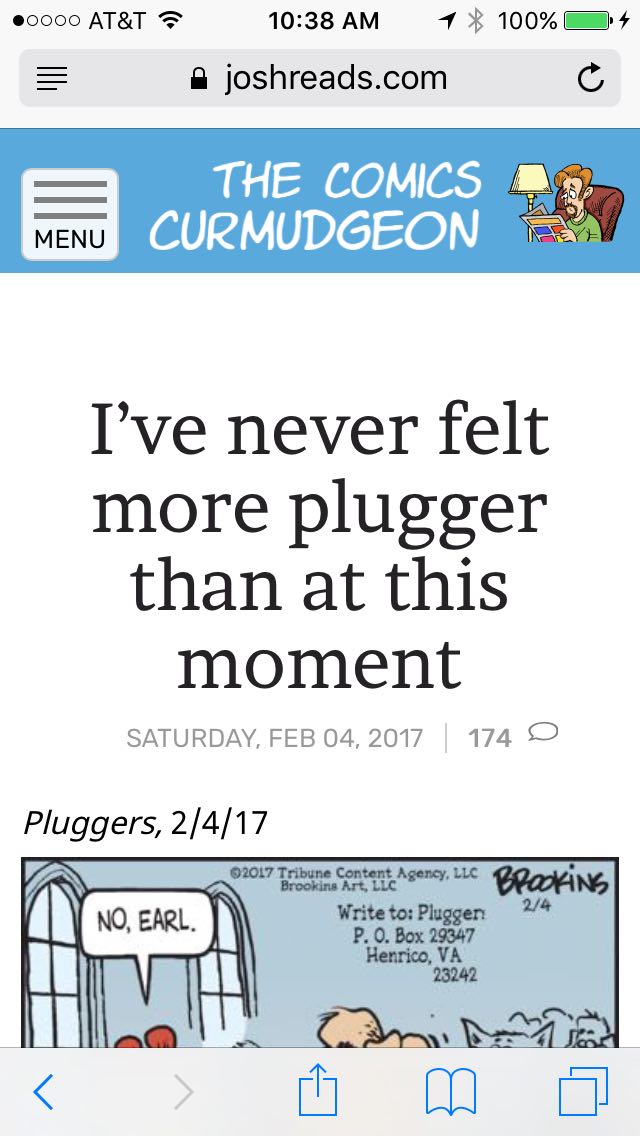 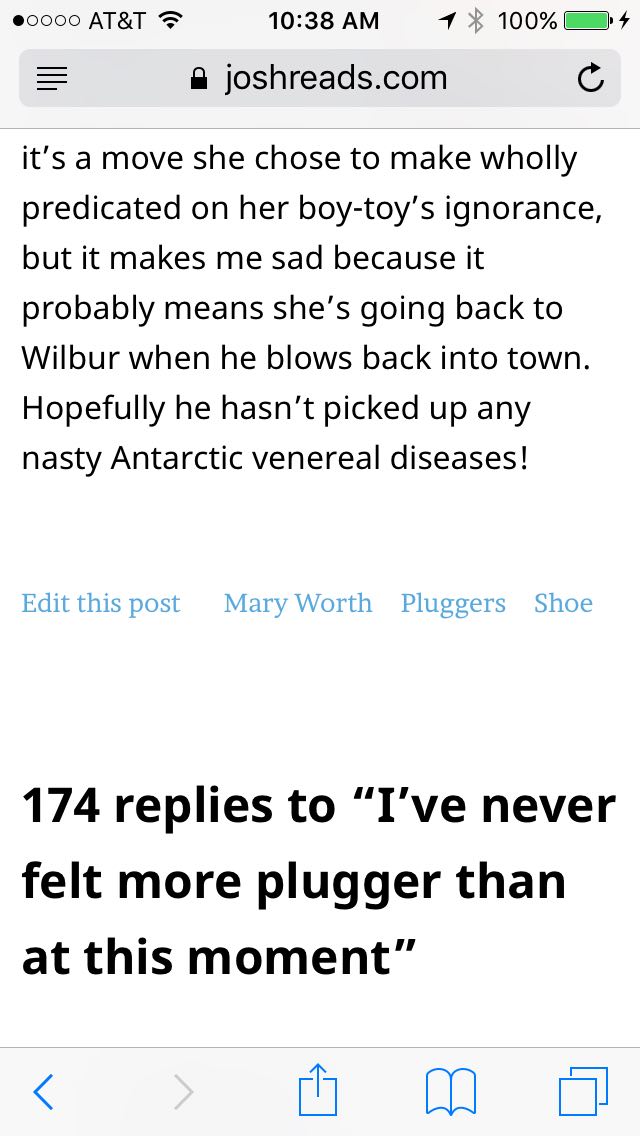 And here’s a glimpse at the ad-free RSS feed (keep in mind that how yours will look varies based on your feed reader): 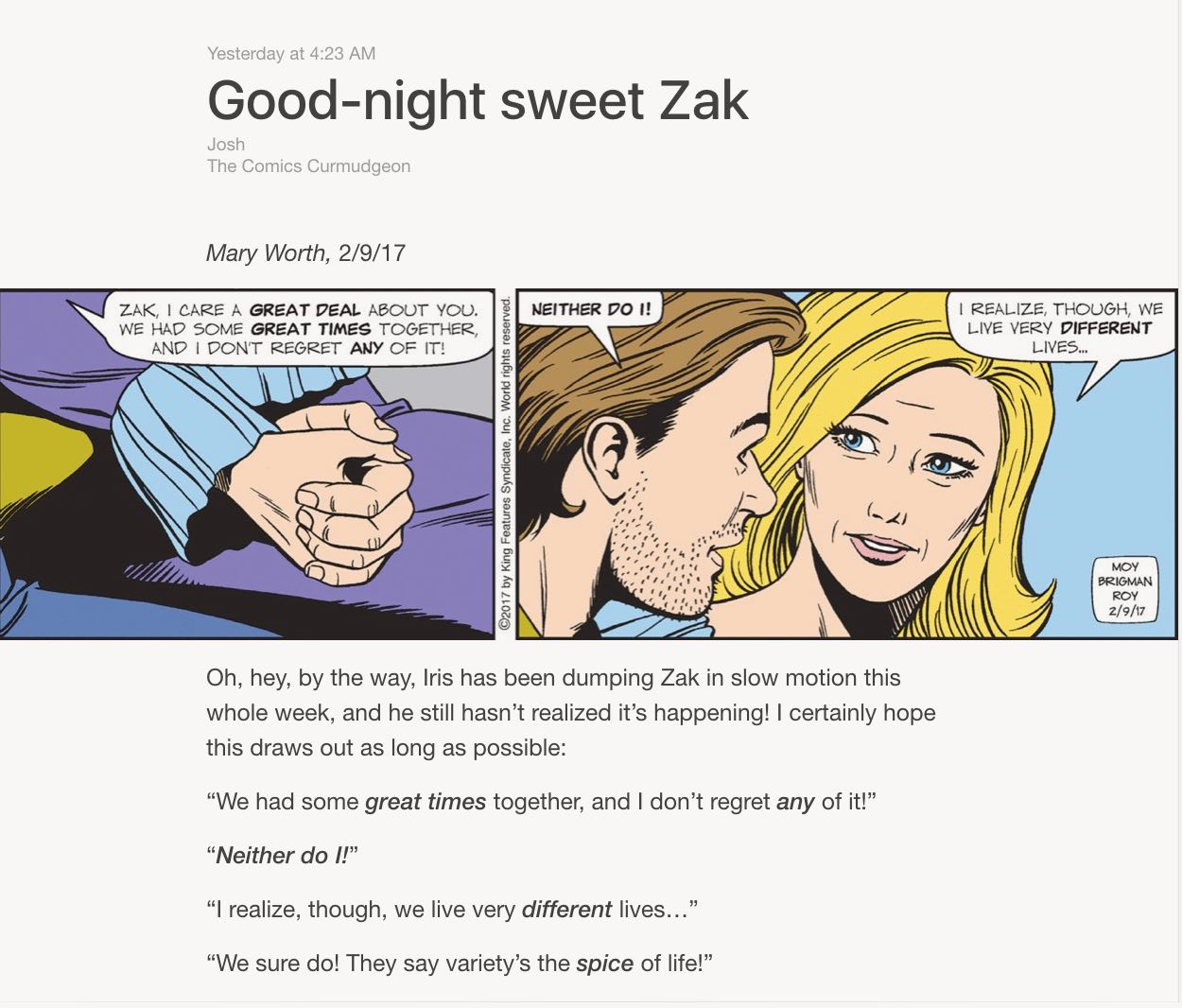 All this glory can be yours, for the low low price of $3 a month, charged automatically to your credit card, which you can cancel any time if you’d like! But wait, did someone say … premium commenting features? No, because I almost forgot about them, but Supporters get to edit their comments (up to 10 minutes after posting them) and also get a what-you-see-is-what-you-get editor that lets you add bold, italics, etc., without using HTML. Here’s what those look like:

And after all that ado, we now present … your comment of the week:

“Maybe Wilson is like a phoenix who must undergo periodic combustion and rebirth. Knowing that there’s no escape from his hellish samsara would certainly be cause for a poor temperament.” –Dood

Your runners up are also funny and delightful!

“Mr. Dithers is not wearing a Tom Brady jersey? We find that baffling, to say the least.” –Fashion Police

“I feel sorry for Ditto. There’s no sadder, more grueling form of rebellion than rooting for the Browns in defiance of your Steelers-fan father.” –Rob Carlson

“That is clearly a male snake. Comic strip convention dictates that female animals — even non-mammals — have long eyelashes. I conclude that Count Weirdly is leaving chocolate eggs as a Valentine’s Day gift for his precious senpai.” –A Concerned Reader

“Loweezy’s mouth in the second panel is pretty scary. She looks like she’s about to suck conches off the sea floor and rip them from their shells, as she endlessly patrols the lagoon.” –BeckoningChasm

“But I know who might be able to help. It’s this dead teenage girl wrapped in a parka that I’m holding. I’ll toss the corpse down the stairs and then start screaming at her, ‘Sophie! It could be worse! You could be dead! So snap outta it, girl!’” –Voshkod

“The middle of math class is definitely the best time to break out the 18th-century invention trivia. ‘Now, who can tell me what four plus five eq … oh who cares, let’s learn about the Newcomen atmospheric engine.’” –Schroduck

“Wait until Lois hears about the research proving that infusions of young people’s blood actually can slow the aging process in older people. Trixie’s gonna grow up real fast when she sees that needle.” –BigTed

“If Trixie’s going to aspire to some sort of unnatural growth, she might want to concentrate on growing a couple extra fingers.” –Dan

Re: Iris’s sleeves: “But I thought theirs was a NO FRILLS relationship! No love, no bonding, just straight up bonking from every position Advil would allow her to get into.” –John Fulcher, on Facebook

“Today’s Blondie is the proof-of-concept for a Ned Ryerson spin-off movie that literally no one is asking for.” –Red Delicious

“Friday Fun Fact! The funeral practice known as a ‘sky burial’ involves leaving a human corpse on a mountaintop to be eaten by carrion birds. Does the Shoeniverse have a similar ‘land burial’ where dead bird bodies are eaten by humans? How different is that from reality? Really makes ya think.” –Chareth Cutestory

“That outburst, my friends, is one of the classic symptoms of Cotton Gin Toxicity.” –Maltmash3r

And I must give a huge thanks to all the extremely kind people who put some scratch in my tip jar or backed me on Patreon! You all are the real heroes.