When I was a little kid, I read Peanuts anthologies obsessively, which is a great way to learn about melancholy. Peanuts characters notoriously sigh audibly all the time, and like lots of children acquiring language competency, I quickly came to understand how sighs were supposed to be deployed, even if I didn’t get that the word “sigh” in these word balloons was supposed to signify the nonverbal sound we call a sigh and not the actual word “sigh.” The upshot is that I would say the word “sigh” as a kid when it was appropriate to sigh, and no adult told me not to do this for years, presumably because it was hilarious.

Anyway, this is a long way to say that I love Mary Worth’s tendency to put nonverbal signifiers, like “groan!” and “sheesh.” and, today, “sigh!”, in thought balloons. Can you really think a paralinguistic utterance like a sigh? Sure you can! Eight-year-old Josh was there to prove it! 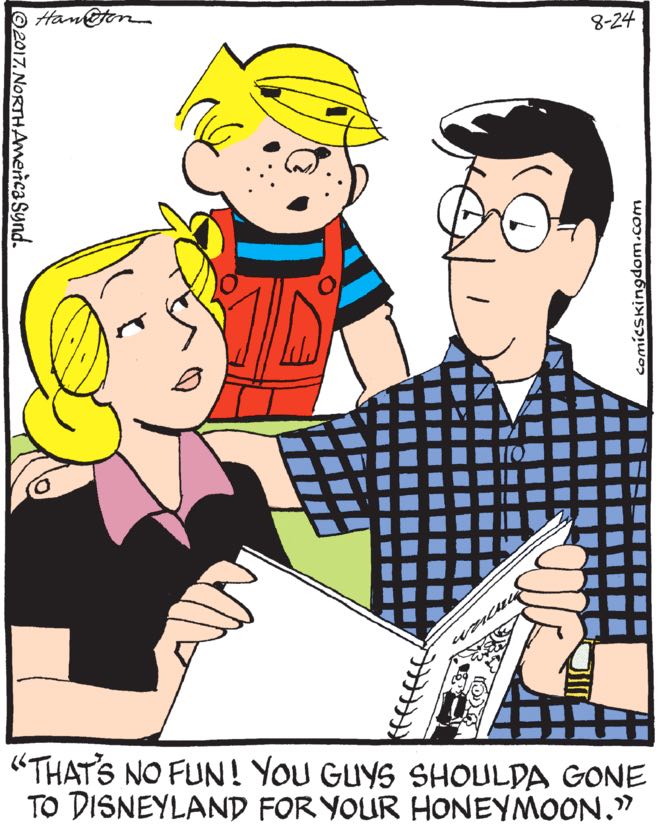 Wait, so Henry and Alice’s entire wedding/honeymoon album is only six pages long? I can’t decide if this means that Dennis is right and Disneyland would’ve been an improvement on whatever they did, or if they spent their entire honeymoon and much of the wedding reception having vigorous marital relations, and the real menace is the fact that Dennis was simultaneously the product and the end of a pastime for which they once had great enthusiasm.