GUYS! It’s the first Friday of the month and you know what that means: it means it’s time for The Internet Read Aloud, my monthly LA comedy show! 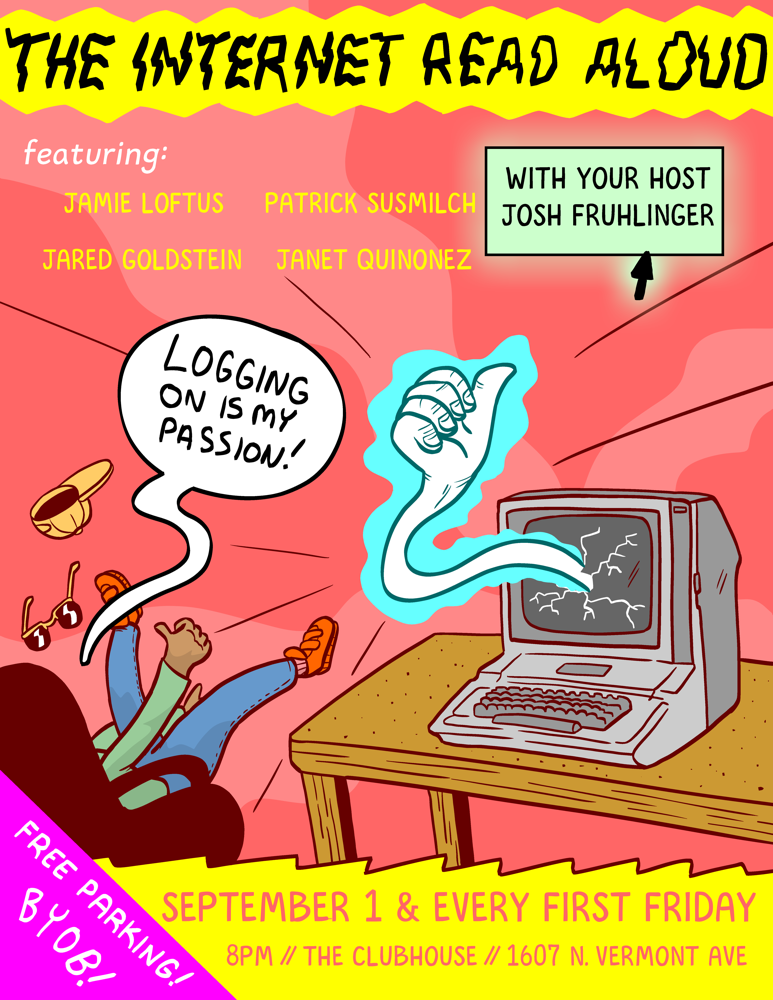 It’s always good and this month’s gonna be great! Here’s the Facebook event, for your calendar-marking pleasure!

“Who, exactly, are we supposed to be rooting for in this strip? Ned, who is at worst, a philanderer, and best, someone with boundary issues? Jared, the sniveling, clumsy stalker? Dawn? Not with that haircut, honey. Maybe it’s the Narration Box. Is it the Narration Box?” –The Mighty Untrained FOOZLE

“This seems like an educational puzzle left over from when Spider-Man was on The Electric Company. ‘Okay, true believers, if an octopus has eight tentacles, how many would a dectopus have?’ ‘I don’t know, Morgan Freeman, how many?’ ‘None, because it doesn’t exist! Now, here’s Grover!’” –BigTed

“So. Even though Tyrannus was literally an ancient Roman emperor, he has never seen a gladiator contest or anything resembling one.” –A Concerned Reader

“I pity those readers who didn’t get to see the throwaway panels of this Curtis. They missed a beautiful sight: Curtis himself, isolated in some kind of lemon meringue purgatory, weeping and begging his mother for mercy that he will not get.” –Joe Blevins

“I don’t know if it’s Diane’s intention to raise a serial killer who garrotes people with a belt while wearing another belt with suspenders, but that’s the way she’s pushing things.” –Artist formerly known as Ben

“I like to imagine Lou in a back room of his greasy dive, swatting at stray cockroaches, a cigarette dangling from his lips, and one finger typing emails on his old food-stained IBM.” –Joe Momma

“It’s a world where clocks are set by the arrival of the train, where a guy named ‘Shady’ is paid in cash. Oh, the humanity!” –handsome Harry Backstayge, idol of a million other women

“Can you find five rail safety violations in this scene? Solution: 1) Station master is distracted during train movements 2) Train driver’s head extends beyond safe clearance zone of the locomotive 3) The station master is standing right on the platform edge 4) Being so close to horn while in operation risks hearing damage 5) An inaccurate clock is being used for dispatching, increasing collision risk. If you said ‘Max has been left unattended on a teetering pile of suitcases atop a trolley right on the platform edge,’ then you are incorrect, because no-one cares about Max’s safety.” –Schroduck

“I believe Shady Shrew’s contract was to ‘fix’ the clock, not to ‘set’ it, and he did just that, oiling the gears and replacing a few springs that were going bad and so forth. Setting the clock is the stationmaster’s job. Coming up tomorrow, ‘Slylock has just been served with a lawsuit for defamation, theft, and false imprisonment. How does he arrange for Max to take the fall?’” –Dmsilev

“I want to invest in Cosmo’s pocket-sized version of the HAL 9000. ‘I’m sorry, Dave, but this venture is too important to be financed through publicly traded securities.’” –Peanut Gallery

“Don’t parks usually have some kind of safety old tire rubber material under the equipment to minimize damage from falls? This looks more like an overgrown meadow that at one time held a park until the factory closed in ’83 and the whole town up and moved, leaving behind a ruin. PJ is about to be eaten (or raised) by coyotes.” –Drew Funk

“I for one wish PJ well in his new career as a Salt-N-Pepa backup dancer. Jeffy, of course, will need a shirt that says ‘It.’ Jeffy isn’t a dancer, these are two separate thoughts.” –Dan

“You know what else can cause damaging radiation? Improper use of the MRI machine. However, I applaud the doctor’s effort in coming up with a truly creative excuse.” –Here Come the Judge

“Of all the weird shit going on with Jared, I can’t get past wondering why he’s eating his microwave dinner with a shrimp fork.” –Tom the Sailor Man

“I really want to hear the story behind the decision to hire the duck man to advertise the french cafe. ‘Zut alors, Pierre! No-one ees buying our fine patés and softs cheeses!’ ‘You are right, Louis, perhaps we should try to attract zees Americans in a manner that appeals more to zem, like the moufler shop next door.’” –pugfuggly

“If it doesn’t count as a date night, then why is she gussied up for one? Hair all curled, trendily mismatched skirt and conspicuously chic yet wholly unflattering blouse, with a ‘cute’ purse if ‘cute’ were defined as ‘something a tween would dismiss as too saccharine’. The dude is in the standard bum uniform of unshaven, backwards baseball cap, t-shirt and sweat shorts. If there was another way to say ‘seventeen steps below casual’ without three day old underwear flapping in the breeze, he’d do it. Considering they’re going on a neighborhood watch, they’re the perfect mismatched-buddy-cop pairs in the making.” –Hogen the Mogen

“I haven’t been following Mark Trail, but it seems to have turned into a Western starring Lorenzo Lamas and Clark Gable, set in a claymation world where everyone’s been smacked in the face with a fencepost several times. A marked improvement.” –Applemask

“Kala has the most bored expression I’ve ever seen on the face of someone smacking a goblet of magical elixir out of her husband’s hand while threatening to divorce him over his murderous ways. You know they do this every week.” –matt w