Usually Snuffy’s brushes with the law are depicted with the same jocular gloss as the rest of Hootin’ Holler’s dysfunctional culture. The crimes are generally relatively low-impact stuff like bootlegging and chicken thievery, and Snuffy goes to jail for a few days and there’s tongue-lolling hilarity all around. Today … today is different. The Holler’s judge, the only real representative of outside authority in this lawless community, looks genuinely horrified by the case he’s just finished presiding over: has his previous indulgent attitude led to this? Even Snuffy and Loweezy look like they’re suffering true shame. My assumption is that the generations-old Smif-Barlow fued finally escalated to the point where Sheriff Tate stumbled upon a ramshackle cabin on the creek where Barlow corpses were stacked like cordwood.

Wait, Kala and Mole-Man were engaged? You know, for a gnomish, homely, nearly blind cave-dweller, he still gets his fair share of attention from the ladies! This makes Kala’s insistence that her husband not disrupt the Mole-Man/Aunt May wedding all the more poignant. Why can’t everyone in this strip be as emotionally advanced as her? 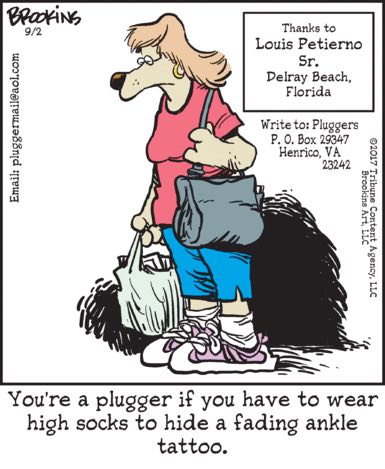 It’s no “Rhino-Man hocks his TV,” but “pluggers feel overpowering shame over something that’s entirely harmless and increasingly socially normalized” is pretty high up there in the pantheon of Extremely Grim Pluggers Punchlines, in my opinion.

“To the CIA! Once we turn in your wife, we can stop worrying about this — and, here’s the best part, probably get a big reward!”