Hello everybody! Your final reminder that tonight, in Los Angeles, I’ll be doing my first ever solo hour of comedy, as I bring together the best of my bits from the Internet Read Aloud as a one-man show! 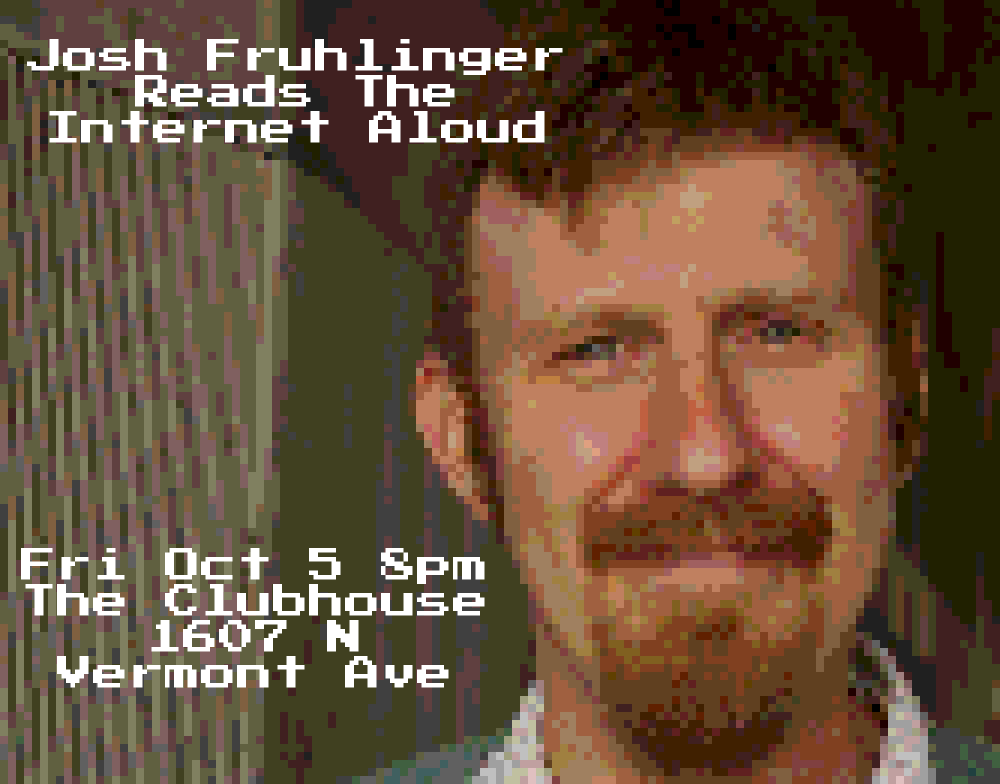 If you’re in LA and have always been meaning to check out one of my shows because you enjoy my whole deal, let me recommend that you come to this one! Here’s the Facebook event, and here are some tips for finding the venue!

“The plugger paper shredder never gets jammed. It gets bursitis.” –nescio

And the runners up — also hilarious!

“Count Weirdly tries to pull an awful lot of scams with fake inventions, but it’s never really clear why. He’s capable of building convincing androids and time machines. I can respect his desire to keep his creations proprietary, but surely he can unload a few vampire pigs on the exotic pet market and finally move out of his motte and bailey slum housing.” –jroggs

“Ah, this brings me back to the wide-eyed optimism of my youth, when I had causes to fight for, like the purity of rubber and the protection of the global supply of yarn. Now I’m old and jaded and I can’t even be bothered to sigh when someone tries to flood the market with weirdly transfigured big rubber that they’re trying to pass off as normal rubber … but I used to believe in things.” –gkl

“Friggin sentient bat has one job: guard the window. Guess tech startups treat their workers like shit in Slylock’s world too, because my man clearly could not care less if Slylock busts this whole operation up with high school chemistry.” –Dan

“‘Ed Crankshaft. We haven’t seen you at one of our reunions in a while.‘ Why is she smiling, you ask? Isn’t she disappointed that Crankshaft isn’t dead? No, because this is the Funkyverse, where living is a worse punishment.” –Ettorre

“Did he choose his sweater to match her hair, or is the sweater made out of her hair? Discuss.” –JJ48

“I think we’re all missing the simpler explanation for what’s going on in today’s Dennis the Menace. After whatever catastrophe happened last time, Mr. Wilson is using the scale before and after his bathroom adventure, to find out how much that sucker weighed.” –Kytan

“The subtle differences between the two panels in today’s Slylock Fox tell quite a story. Slylock, Max, Deputy Dog and Deputy Duck loaded three prisoners onto the transport van. That much is clear. But at some point, they unloaded them, and something terrible happened. Something that would have been directed by Quentin Tarantino and set to an oddly upbeat ’80s riff. As they are reloaded into the paddy wagon, we see the dog prisoner has lost his teeth, presumably having them pulled out by the Sociopathic Shamus after he chewed off Slylock’s ear. The bird prisoner has been shaved, probably as retaliation for ripping off Deputy Duck’s tie. The rear view mirror is gone, I assume after a violent melee in the driver’s seat. And Deputy Dog has thrown away his badge. He’s seen too much, he can’t put up with this crap anymore. Just get these three to the station, and he’ll put in his papers, retire, go fishing, maybe get an RV and travel the country with Mrs. Dog. Anything to get away from that fox and mouse. As he starts the engine, he can’t forget Slylock’s face, impassive, as the Vicious Vulpine pulled out the dog’s fangs. He turns up the music, another upbeat ’80s song, to drown out the thumps and howls from the back of the van.” –Voshkod

“‘Remember when comic-book writers used to think that radiation could give people superpowers? Well, it turns out they weren’t scientists.’ ‘Batman’s a scientist.’ ‘They’re not Batman.’” –BigTed

“Thinking that Iron Fist should change his name to Canary Espadrilles.” –Fritz H.

“I almost have to respect the utter contempt that Gil Thorp has for the casual reader of their strip, as each day they present two incomplete sequences smashed together and just dare you to make sense of them. ‘Oh, did you not understand the context of the French movie comment? Too bad! Here’s a half-finished thought about another storyline already in progress, but if you want anything close to resolution on that you’ll have to wait until tomorrow, or maybe next week. Why do we do this? We’re Gil Fucking Thorp, that’s why.” –pugfuggly

“This guy’s from a broken home. He’ll be up for some law-breakin’. I also have a guy whose parents were lax churchgoers and another guy whose mother was the household’s main breadwinner.” –Jenna

“The only missed opportunity here is that she didn’t yell, ‘DO IT FOR THE ’GRAM!’” –Joe Blevins

“So, Iron Fist really loves yelling his own name. It makes sense — you’ve got to build a brand, especially in this day and age — but he’s going about it all wrong. He should be talking about ‘the Iron Fist’, to make clear that he is unique. Saying ‘an Iron Fist‘ suggests it’s a generic name, and could potentially cause him legal problems with trademark dilution. If he insists on the indefinite article, he should least yell ‘an Iron Fist™ brand fist’”. –Schroduck

“She’s got shelves and shelves of actual reading material behind her so it seems unnecessary for her to be reading a pretend book. That said, her object work is impeccable; those Second City extension classes were money well spent.” –Shoe Substitutes