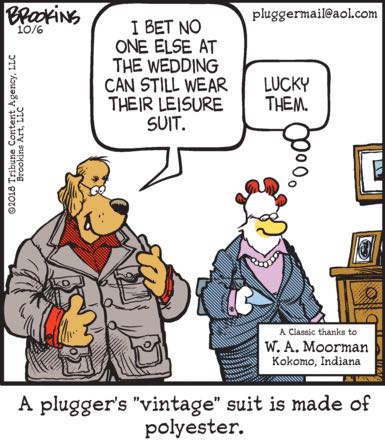 A good example of the stranglehold Baby Boomers have had on American self-image comes from the weird version of real-life Comic Book Time that defines the life history of people in syndicated newspaper comics: young-to-early-middle-aged adults who still have kids at home somehow went to Woodstock or enjoyed disco fever at its peak, despite the fact that real-life humans who fit that demographic were busy being born during those cultural moments. That’s why I have to give grudging admiration to today’s Pluggers, because however you define a plugger, you have to admit that they’re old. You’re old, Boomers! It’ll happen to me someday — some might argue that it’s already in the process of happening — but I just want to hear you admit it, and I will take this syndicated Pluggers panel as a confession.

Ahhhhh, it’s a strange little old man slowly loping down a condo complex hallway, past discount art purchased in bulk at Pier One, grouchily refusing Mary’s plea to engage in some emotional processing. Has a more perfect Mary Worth ever been created?