A thing that was a big deal about Jordan when he was first introduced was that he was a veteran of one America’s several ongoing wars and had been wounded in action and had two artificial legs, a fact that has been … not necessarily retconned away but not talked about very much! But anyway, it appears that now we’re in store for a very special PTSD plot, which is appropriate and medical but it’s kind of weird that it’s only coming up now. Like, Michelle was an army nurse, so you think she would’ve … like … put two and two together here, rather than just being like, “My man, who lost his legs in an explosion, I hope he doesn’t get stressed out in the restaurant biz like the way he does around explosion sounds, which is a fairly unremarkable reaction and we’re not going to discuss in any way!” 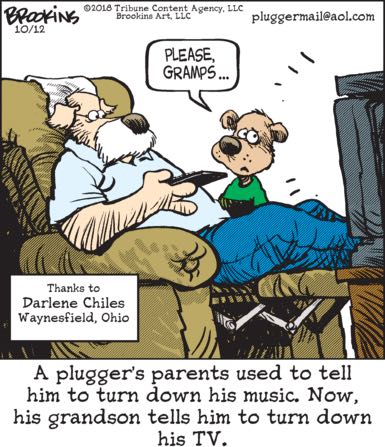 This could’ve been just another “Ha ha, pluggers’ bodies are falling apart as they age” panel, but, the anxious look on that l’il plugger’s face is truly harrowing. “Gramps, please … please turn down the TV. It’s so loud. None of us can hear each other. You can’t even hear me. And you’re sitting only about three feet away from the set. Do you even know I’m here? Do you even care?”