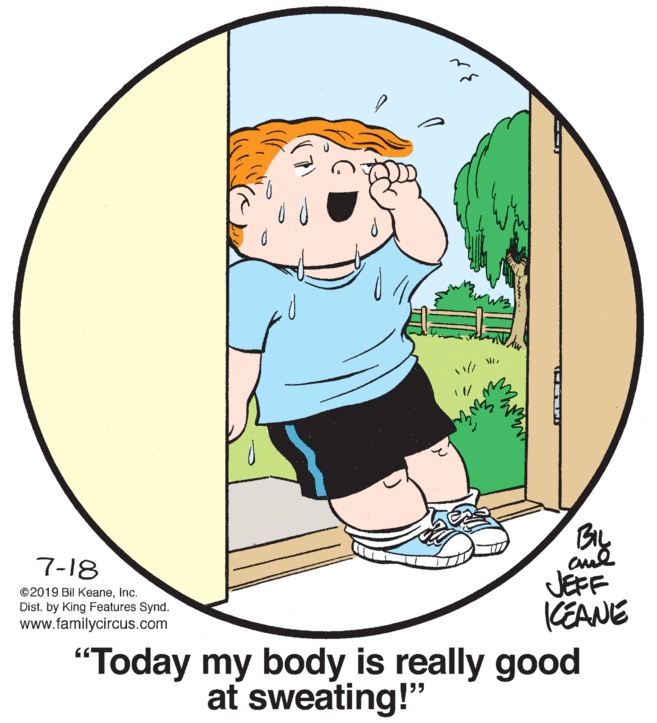 There’s a common joke that little kids act like they’re on drugs sometimes because everything — even fairly basic human biological functioning — is new and strange to them. I don’t know if drugs are quite the right metaphor here, but I appreciate the extent to which heavy-lidded Jeffy is just luxuriating in the sensation of sweating, which most adults find somewhere on the spectrum between uncomfortable and gross. Not Jeffy! His body is magically creating water out of nothing, and keeping him cool in the process, and he can’t get enough of it. It’s like taking a refreshing shower, except he’s the shower! Ahh yeah, that’s the stuff.

Oh, snap, JJ! Looks like you followed the boring “conventional wisdom” that if you point a gun at a person at point-blank range, they’ll more or less do what you say, because you can pull the trigger in just a split second and they don’t want to be killed. But Mark Trail doesn’t worry about any of that business! Mark Trail knows his unerring fists are faster and more powerful than any pistol! Mark Trail is always ready to powerfully twist his torso and knock out evil-doers an instant, no matter if they’re fully bearded or just lightly stubbled! Remember, to stop a bad guy with a gun, you need a good guy … who’s Mark Trail.