Sometimes, faithful readers, I have to take a good, hard look at myself and acknowledge that I’ve spent a decade and a half — more than half of my adult life — regularly getting angry online about how the popular widely syndicated comic strip Marvin just makes jokes about shitting, day after day after day, right in public where everyone sees it. Sometimes I feel like I do it too often and should save my righteous fury for days like today, which features a strip that’s not only about Marvin shitting but actually demands that we get into the weeds of the mechanics of the whole thing. Like, isn’t the whole deal with Marvin that he doesn’t care about getting his diaper changed? Wouldn’t he be more likely just to shit himself and the keep eating, having just made more room in his stomach, to the disgust of his fellow competitors and everyone around him? Anyway, damn you, Marvin, for making me contemplate this today, and also several times a week, forever. 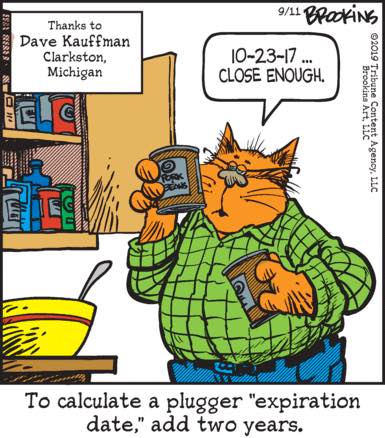 Pluggers at least has the courtesy to leave the digestive distress this plugger’s about to experience largely in the realm of the imagination. Will he endure a mere gurgle or two from chowing down on the long-expired canned food alone in his kitchen, or suffer the full-on runs? The details aren’t as important as the overall gist, which is that pluggers are cheap, lazy, and so depressed that they honestly don’t care whether they live or die.