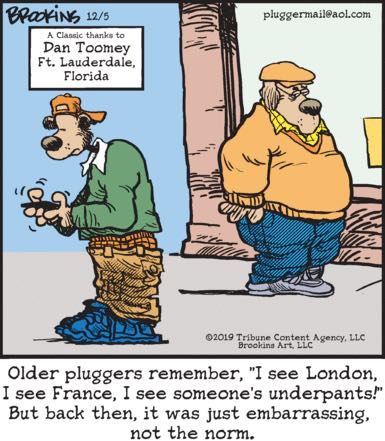 Finally, folks, finally, at long last, Pluggers has weighed in on the trend of wearing baggy pants that sag low enough to expose your underwear, the trend that (according to the impressively detailed and cited Wikipedia article) began over 20 years ago in the mid 1990s, long enough ago that many who were young and hip when it started have since aged into pluggertude, long enough ago that the trend has had time to mostly peter out and then be revived, and here is what Pluggers has to say about it: pluggers simply do not care for it. They do. not. care. for. it. Congratulations, Pluggers, on producing possibly the least surprising Pluggers panel in the entire history of this feature.

IMPORTANT NATURE TIP FROM MARK TRAIL: Does it feel like it’s gotten colder? This may be because of a change in the seasons or natural temperature variation; but it’s also possible that you’ve moved to a higher elevation. Be sure to stay vigilant and aware of your surroundings!