“Josh,” said nobody, absolutely nobody, nobody real and nobody you could even conceive of as being a vaguely believable fictional character, but for this bit imagine that there might, in some bizarre parallel universe, be a person or persons who would ask the following question, “What’s going with the thing in Gasoline Alley where they were going to save the farms or whatever?” Well, the save-the-farms meeting has devolved into absolute chaos, and not even the fun kind, just the kind where nobody’s really in charge and they’re definitely not sticking to the ostensible topic, which is probably fine because none of these dopes has any idea about how to save the farms, that much I can guarantee. Anyway, the strip’s extremely non-beloved wacky parrot character is here stirring up shit, and is today apparently stealing valor! The nerve! Can’t wait for him to go to prison. 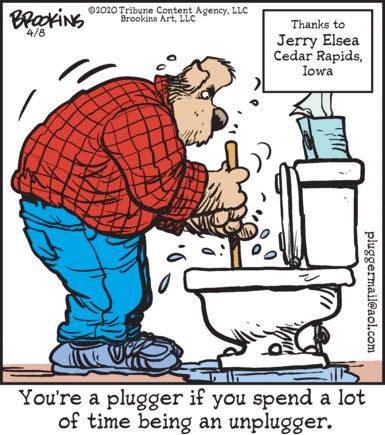 Despite the contempt I regularly shower onto Pluggers, I would be very sad if it went away! And yet I can’t really see where it has to go after today’s installment, “Pluggers sure plug up the toilet a lot, with their poops.”