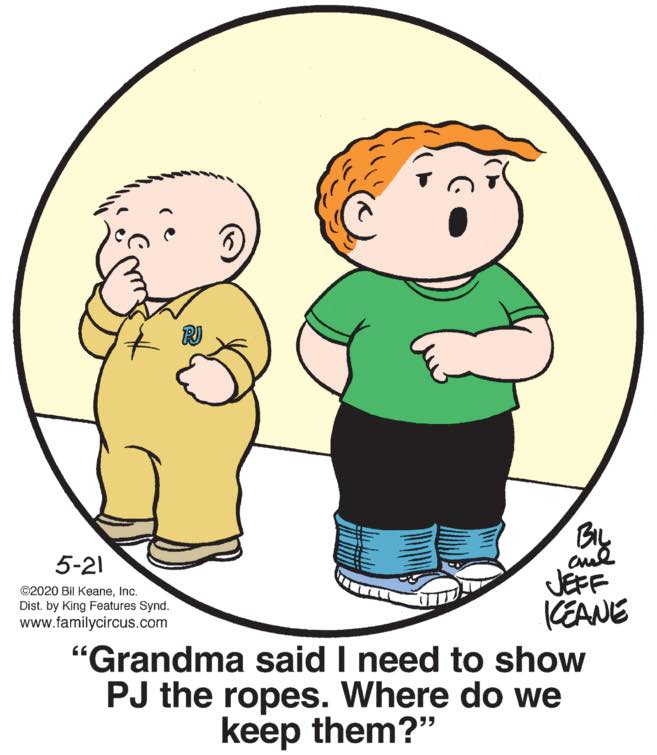 Real talk: I was originally going to do a bit here about Jeffy thinking his grandmother was ordering him to strangle PJ, but decided that was too dark even for me, then though about spinning a scenario where Jeffy and PJ were going to “play jail” (PJ clearly being in a prison jumpsuit) with Jeffy giving him advice on which gangs to join and which guards were corruptible and such. But then I decided that nothing could be more hilariously grim than the actually intended reading of this panel, which is that Jeffy is such a dull-eyed literalist that he believes that his grandma really wants him to find some ropes and show them to his little brother, for no reason he can fathom but honestly, how much reason can Jeffy ever really extract from his world, anyway?

Funky Winkerbean has been taking a break this week from “Les is simultaneously morose and smug while sabotaging his Hollywood career” to bring us an episode where Funky has some kind of heat stroke hallucination while running and thinks he’s talking to a weird robot, who is instantly the most likable character in this strip. I for one am very excited to watch the strip change its name over the next few years from Funky Winkerbean to Funky and the ‘Bot to Everyone Loves The ‘Bot! (Featuring Funky Winkerbean And Pals) to All Hail The ‘Bot.