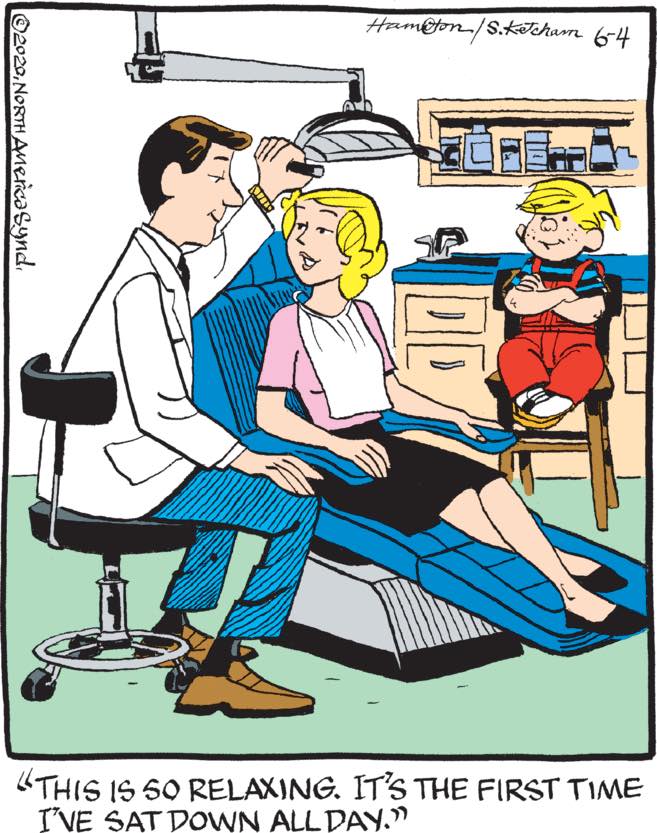 This is definitely the most erotic Dennis the Menace panel I can remember seeing in some time! I guess the joke is that Alice is exhausted because she has no access to childcare, which is why she’s been on her feet all day and also why Dennis is sitting there staring at her while she’s in the dentist chair, but the way she and the dentist are gazing into each other’s eyes definitely seems like things are about to get real romantic real fast, which is why it’s so unsettling that Dennis is sitting there staring at her. Couldn’t she have just left him at the Wilsons’ house? Like, he clearly spends several hours a day there anyway.

Ha ha, Les did forget that his own wife works at the same school where he works, probably, but honestly, did she even need some sort of inside information to know that Les is having a bad day? Bad days are the only kind of days Les has. He needs them, to live.

UPDATE ON MY LIVE COMEDY SHOW THAT WAS SCHEDULED TO HAPPEN TOMORROW: We the comics who were going to be in that show do not feel like it’s a particularly “funny” time to be in America right now! We’re postponing it to a later date. If you’ve written to me asking for the Zoom URL for the show, I have your email and I’ll send it when I have a new date/and time! And if you want to be on that list, email me at jfruh@jfruh.com.