Hey everyone! Another edition of my live comedy show, The Internet Read Aloud, is happening live on Zoom ONE WEEK FROM TODAY, on August 28th! 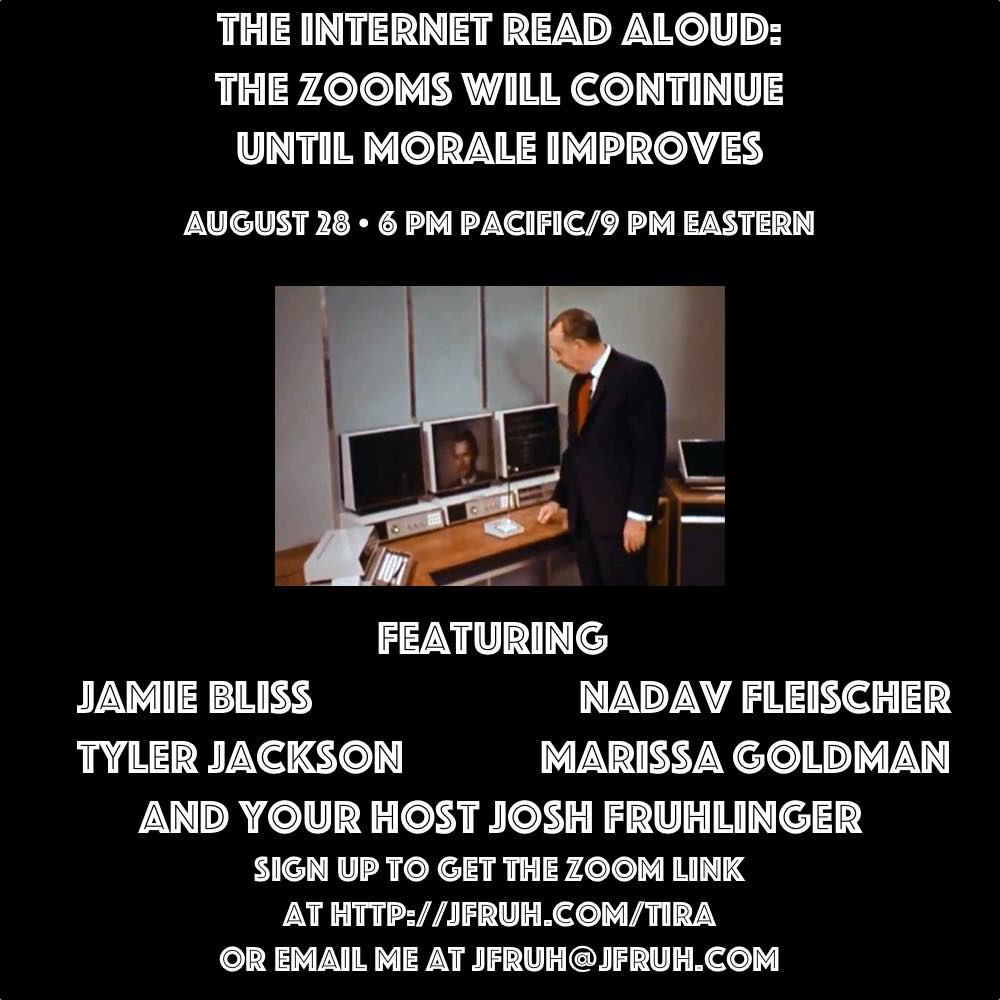 If you want to get information about the show, including the link you’ll need in order to watch it, you gotta sign up for the Internet Read Aloud mailing list. I promise to only use your email to give you updates on these shows and for no other purpose! There’s also a Facebook event for this month’s show, if you like Facebook events!

One thing that I bet you really like is comments of the week! Well, good news:

“Cancer is of course the most Funkyverse way to die, but ‘burned alive by wildfire because you were gawking at a filming location for a cult 1930s serial in what is almost certainly a mandatory evacuation zone’ has to be pretty high in the rankings.” –TheDiva

“The fact that they live close to a church doesn’t stop Hi and Lois from burying a body on their property.” –nescio

“It would cost Thirsty a hundred bucks each week to get someone to mow his lawn, given how enormous his yard is. On the other hand, he’ll never get it done by himself, since Irma apparently wants him to do it with a rake.” –BigTed

“The sudden appearance of Hi’s barn raises a lot of questions but also provides an answer to ‘Why did Hi and Lois keep having children?’ More kids means more farmhands, simple as that. Dot should enjoy these waning days of talking to sunbeam or whatever before her tender hands are coarsened by fieldwork.” –Jenna

“The most unrealistic thing about today’s Hi and Lois is that there’s no way Lois hasn’t uploaded twenty photos of Trixie sleeping on laundry to Instagram already. Hi must have turned his notifications off if this is at all new to him.” –Truckosaurus

“Wow, Lois has a LOT of faith in the integrity and waterproofing of Trixie’s diaper.” –Schroduck

“While the child in Daddy Daze is depicted as a pre-verbal infant, the artist is drawing on the more extensive comedic possibilities of his real-life child’s toddlerhood or pre-school years. Meanwhile, with the original model of the Trixie character long since grown, the artist has confused her with a cat.” –a.

“‘You see, colonial domination enforced by brutal violence will provoke a violent backlash by the colonized people and disrupt international relations. Capitalism allows voluntary international cooperation, so much that local people will welcome globalisation for the fruits it brings, such as more consumer goods.’ This strip must come from the period when Francis Fukuyama was writing Crock.” –Ettorre

“A quick google tells me that there are no Wal-Marts in Algeria, nor in any part of North Africa. What I’m saying is that Grossie is still waiting there, and maybe dead.” –pugfuggly

“Today’s Funky Winkerbean inspired me to look up whether excessive grieving is a mental disorder. It is, it’s called Complicated Grief Disorder, and guess what? Les doesn’t have it! He’s not suicidal, unfocused, emotionally numb, or any other symptoms. I literally looked in the DSM-5 for a way to make Les Moore sympathetic, and he still fails at it.” –Banana Jr. 6000

“With Miss Buxley’s expression I prefer to think she’s asking ‘how is this perfume?’ because it’s very much not.” –Rejax

“Our thoughts today are with Michelle (last name unknown), frightened into a coma when her personal space was invaded by a Curtis Wilkins parade float.” –Artist formerly known as Ben

“I thought I would have a rough time here in Santa Royale, but then I met Toby. Have you seen her husband? Have you seen his beard? She breaks down crying over banana bread, but… [bite of lunch] I dunno, there’s more going on there.” –Dan

“Love the attention to detail in this strip. Les’ hairline in the third panel has crept so far back to reveal scalp even when we’re looking up at him.” –Bill Peschel’s Tummy Brain

“Do you think they’ll hold off shooting while he flies back to Ohio to retrieve them? Or does he travel with them, which is even more unsettling.” –Maltmash3r

“Note the faintest flicker of … anger? shame? … as Les looks away, unable to meet Marianne’s gaze. ‘Yes … I think Lisa would have wanted that,’ he says bitterly. Most of the time, he’s happy to serve as Her dark messenger here on the material plane, spreading her legend in preparation for the great Day of Ascension when mankind throws off the shackles of the old god and accepts Lisa as their One True Mistress. But some days … days like today, when he must lure another innocent into Her unspeakable web … it chips away at what’s left of a man’s soul.” –Doctor Moreau