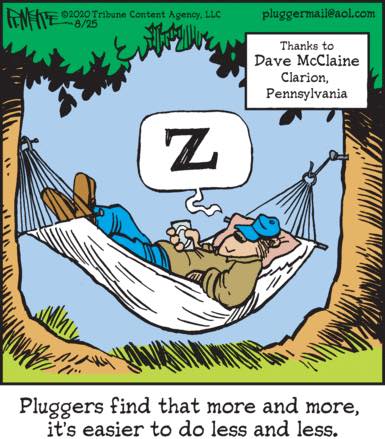 The old era of Pluggers has ended and a new one has begun! How will these new-look pluggers distinguish themselves from their predecessors? Well, pluggers have traditionally be depicted as hard-working blue-collar folks, whose very name comes from continuing to “plug” away reliably even though society’s deck is stacked against them. But new pluggers? New pluggers have realized they can just take a nap and they honestly don’t even feel bad about it! Plugging away at things is for suckers! I’m both excited to see where this strip is going and terrified at what pluggers will do now that they’ve rejected the societal norms that have served as guardrails for their behavior up to this point. 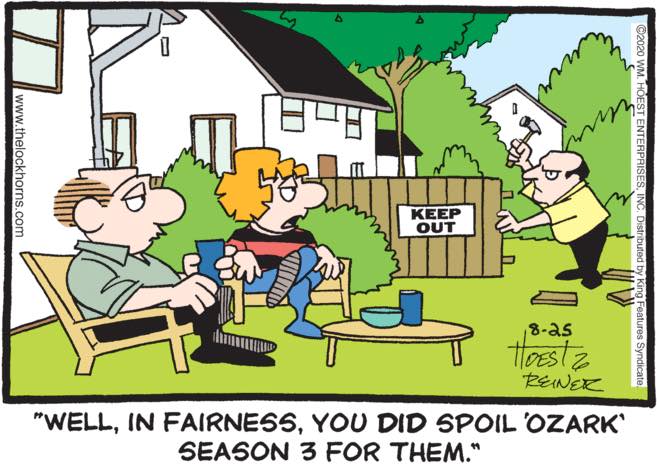 Maybe it’s a bit odd, but I’m more willing to accept change in Pluggers than I am in The Lockhorns, who in my opinion are inhabitants of Levittown circa 1965 and should stay there and then, forever, and should definitely not be watching shows only available on streaming services. Anyway, that fence is nowhere near tall enough to block out spoilers, neighbor! Leroy may be a gnomish three feet tall, but he can still easily shout audible spoilers into your yard! The only solution is to enclose their entire property under an air-tight dome, which frankly you should’ve done a long time ago.