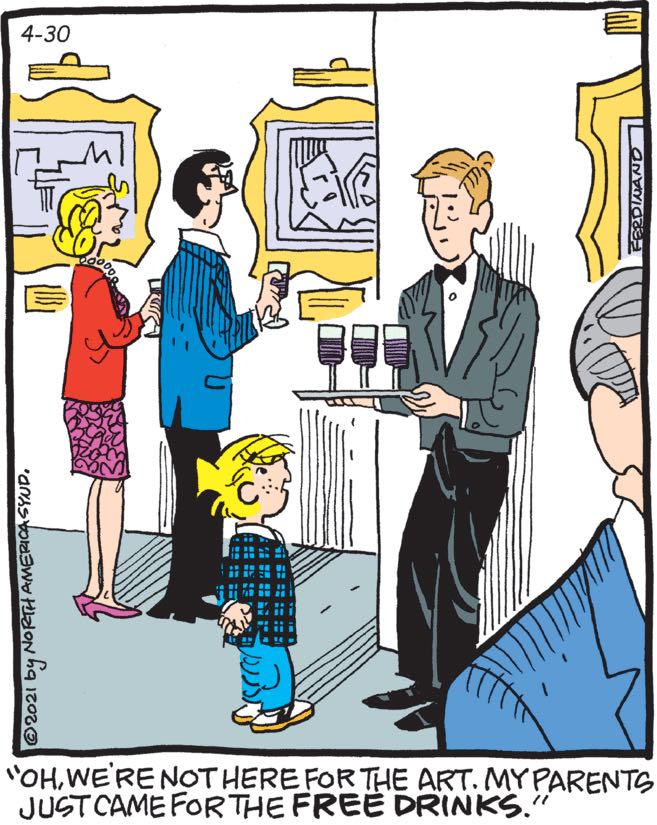 I spent way too long trying to parse Henry and Alice’s facial expressions and how they line up with Dennis’s tattletale claim to the bored and irritated cater-waiter. They both seem to be having a good time looking at art! Are they thinking, “Gosh, we didn’t come for the art but we are enjoying ourselves. The Municipal Art Museum audience development team really knows what it’s doing when it runs these free-to-the-public art-and-wine nights!” Or is it more, “Ha ha, this art is shit but we’re on wine glass number four and have gotten blotto on the dime of the Municipal Art Museum’s corporate sponsors. Can’t wait to drive home!”

One odd result of comic book time is that Dagwood is canonically a guy in his late 30s or early 40s who’s probably been in his job in his own internal timeline for five years or so, and maybe even took the job as a stepping stone to other things, whereas those of us in the real world know that he’s been DithersCo’s office manager since before we were born and will continue to be long after we’re dead and in the ground. Thinking of things in those terms brings an interesting perspective to Blondie’s frankly horrified face in the final panel, as she realizes that Stockholm Syndrome is setting in and maybe her husband really is going to be working for that awful man indefinitely.

152 replies to “Why pay for a sitter when the docents will keep Dennis from killing himself for free, probably?”