FOLKS! This month’s Internet Read Aloud is happening in a mere seven days, in the city of Los Angeles, California! Got a fun lineup and the price literally cannot be beat (unless someone is paying you to go to their comedy show, and which seems like madness). 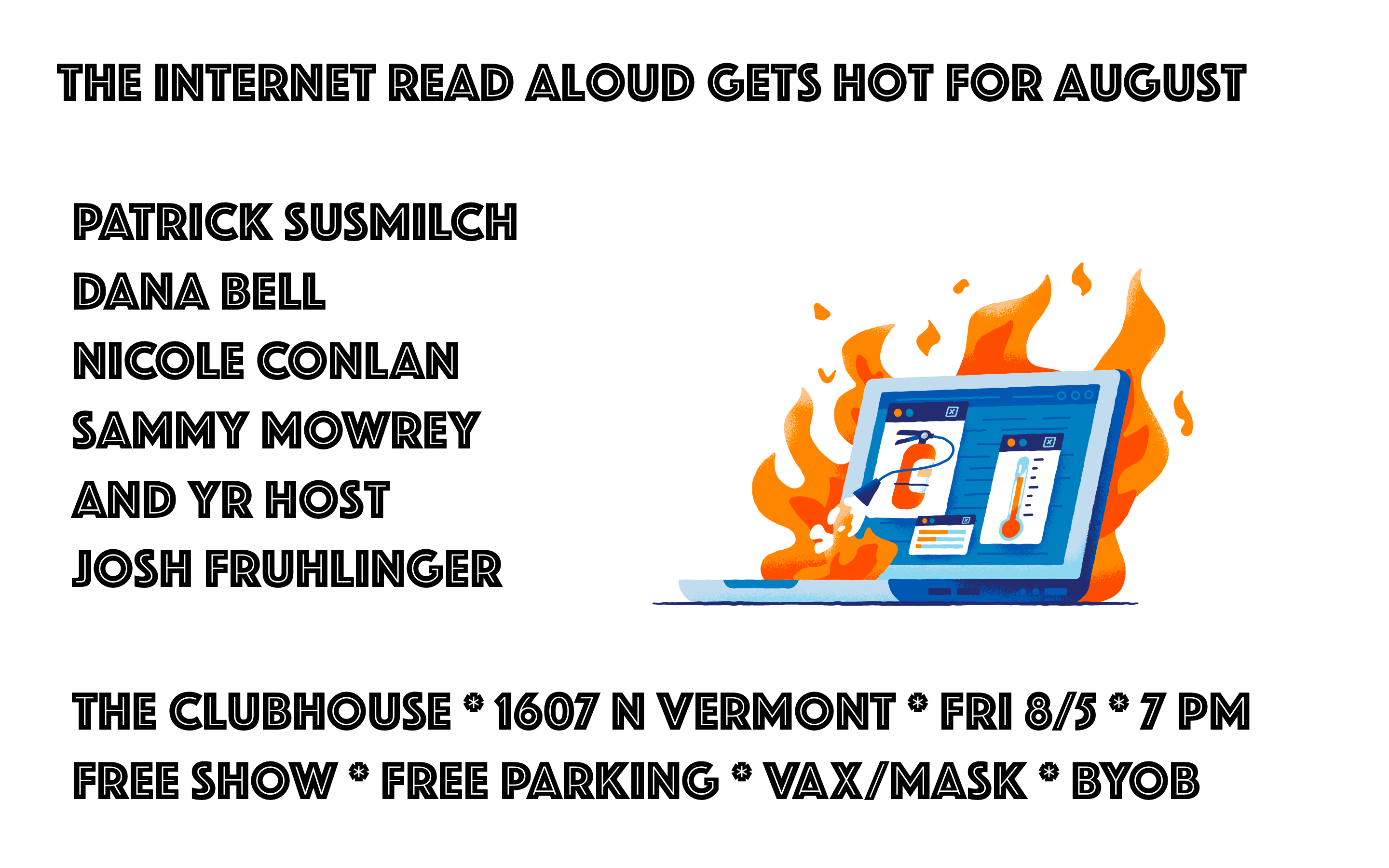 Here is the link to the Facebook event! Please come if you are able, I promise you’ll have a good time!

Until then, to get your comedy chuckles, you should check out the comment of the week:

“I’m glad to see Sam has brought along his framed law license and diploma, since he will need to somehow earn a living. Is he still licensed to practice? Did he get his mandatory CLE hours every year? Does he realize he may lose his security deposit if he makes holes in the wall to hang those up?” –Arabella

And your runners up are also hilarious!

“Dawn and her friend have left the diner and taken this conversation to some place more appropriate: the local middle school.” –Hibbleton

“The only way the bolded my makes sense is if they were just discussing pranks Mr. Mitchell pulled at some other age. I’m gonna guess his latest prank was coming home with a print newspaper, as part of his ongoing campaign to shame Alice for her phone addiction.” –Peanut Gallery

“Coach Purpleshirt can’t wait to crush Milford just like he’s about to crush his tiny, delicate glass of limoncello.” –reader1!

“Mary is obviously starving for inside info on the Jared/Dawn breakup, and she’s so desperate to get it that she’s willing to make the ultimate sacrifice — actually spending time with Jared. Look at her in panel one. That’s the look of a junkie in need of a fix.” –Joe Blevins

“Everyone’s already mentioned the weird asparagus/carrot hybrid (asparrot? caragus?) so I’m going to focus on the wild rice, which does not grow naturally or commercially anywhere near the hill country where the Smifs reside. Loweezy is living a lie, claiming a subsistence existence while getting all her raw ingredients delivered from Whole Foods.” –TheDiva

“You can tell that Jenny is just going through the motions because she’s googling primary schools on a waffle iron.” –pugfuggly

“The obvious choice would be to let the chili dog win. Third panel is Mr. Dithers yelling at a giant 12-foot chili dog dejectedly standing next to the water cooler.” –nescio

“‘One morning, as Dagwood Bumstead was waking up from anxious dreams, he discovered that in bed he had been changed into a monstrous chili dog. He lay on his bread-enfolded back and saw, as he lifted his head up a little, his red, meaty abdomen bulging with cow lips and hog ansues. From this height the blanket, just about ready to slide off completely, could hardly stay in place, because of the rapidly cooling mass of beans, cheap meat, congealing cheese, and sauce that covered him. His legs, pitifully thin in comparison to the rest of his circumference, flickered helplessly before his eyes. What’s happened to me, he thought. It was no dream. So, with enthusiasm but not without remorse, he began to eat.’ –Franz Kafka, The Meatamorphosis” –Voshkod

“Wow, Jared reverse-aged from, what, 52 in the first panel to 14 in the second. It must be the rejuvenative effects of … Flimmo (?) Soda and … [turns head, squints] a bag of CHIPS.” –jvwalt

“You might be a plugger if you’ve decided to try product placement, and THIS is what you came up with.” –Mysterion

“If you regret a technological innovation that is decades old, you’re a plugger trapped in a teenager body.” –Ettorre