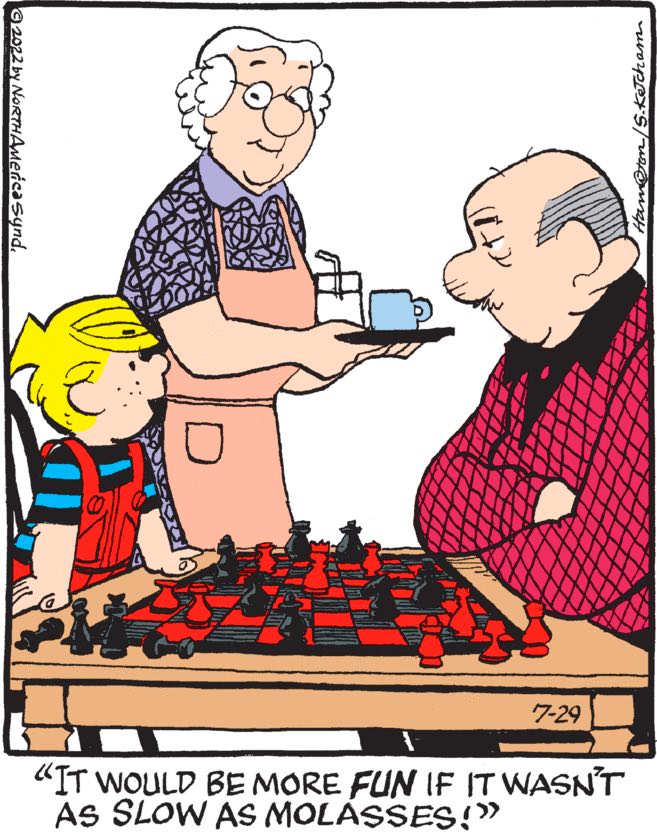 The punchline here is just supposed to be “ha ha Dennis is dumb/a child” but the arrangement of pieces on the board seems to indicate he and Mr. Wilson are pretty deep into this game considering Dennis is, what, five? Six? Maybe the comment is meant to indicate that Mr. Wilson can’t keep up with Dennis’s keen chess mastery, and Dennis is actually going to soon graduate from thrashing his elderly neighbors and move on to the high-stakes world of competitive chess, which, if the drama depicted in the The Queen’s Gambit, now streaming on Netflix, is any guide, would actually be a fairly menacing move on his part.

Definitely one thing that doesn’t trigger my suspicions at all is when I am a stranger in an unusual community and a comely local lass I’ve just met offers to be my guide in showing me a mysteriously named local monument. I would fully expect to arrive at this “Fountain” and not be asked to participate in a ritual that nobody will tell me any details about, and if by chance I were asked, I feel confident that I could simply decline and receive no pushback about it. This evening is going to go great for Dick!

Oh, stop whining, you two, if you want to court death to feel alive just do drugs like normal people