Holy crap, a guy can’t get out of town for two days without all hell breaking loose on the comics pages. There’s way too much going on to leave unremarked until I get back from Bermuda, so here’s the wrap-up. 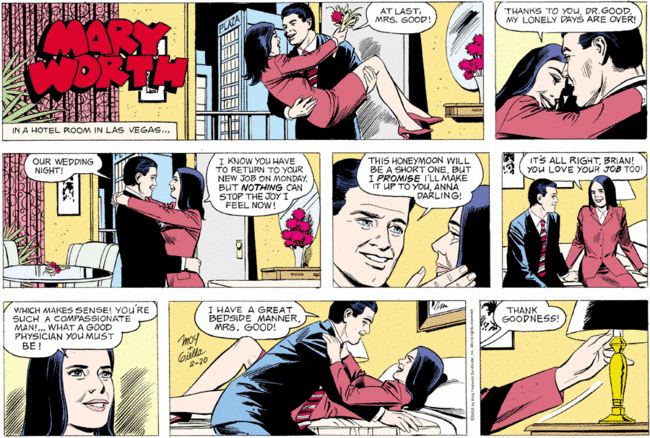 OK, so Dr. Brian was apparently wracked by so much pent-up lust after being constantly interrupted in his two-week quest to pop the question to Anna that, once he finally managed to spit it out, they flew directly to Vegas, checked into whatever sordid, jaundice-walled hotel is across the street from “Plaza,” got hitched, and then headed for their lumpy, overstarched nuptial bed the very next day. This is without doubt the fastest that anything has happened in Mary Worth, though the fact that they’re flying back home in the next day’s strip may indicate that something else happened a little too fast, too. (OK, that’s a cheap shot, but I have to work out my anger about the loathsome “bedside manner” foreplay talk somehow.) Anyway, Monday’s strip features some Mark Trail-style talking scenery and what appears to be the traditional post-coital arm-wrestling match. 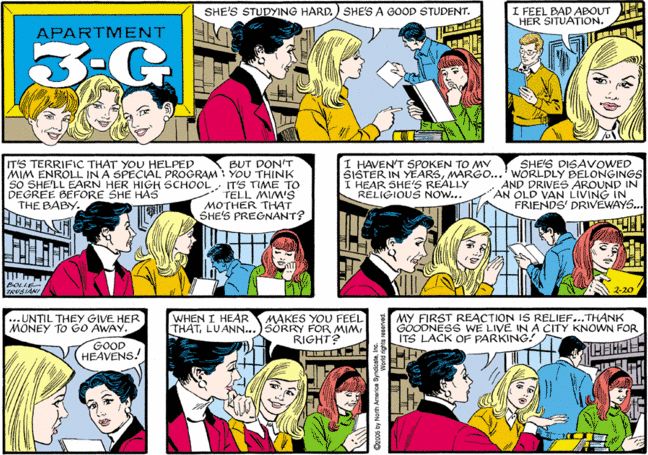 Meanwhile, in Apartment 3-G, not only does Tommie get two panels all to herself, but we also learn an important truth: good mothers are involved in their teenage daughters’ roadside activities, while bad ones live in vans in other people’s driveways. I can’t wait to find out what particular set of van-focused scriptures Mim’s mom uses as her guide to life. This sequence also features two classic Margo assertions: that parking-poor Manhattan is thankfully impervious to Lu Ann’s sister’s peculiar brand of driveway-based spirituality, and that being nice to people is really, really hard, especially when you have to give up your couch to do it. You can see that the effort involved in showing compassion is so great that it’s making her eyes point in different directions.

And, finally, over in Mark Trail…

“What you said is wrong! I dispute what you said! My lawyers will force you to show some sort of what-you-said evidence! Damn you, Trail!”