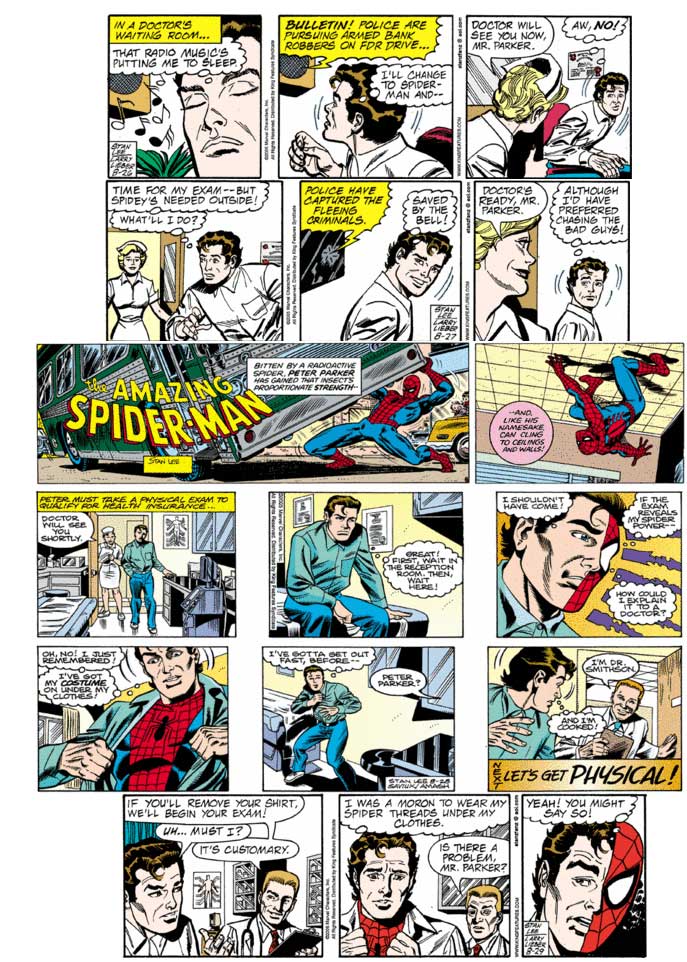 It many not come across in the positive, happy-go-lucky demeanor I project here, but I can be a moody and vengeful bastard. For instance, way back in January, I suggested that Kraven was kind of a lame super-villain. Someone out there on the Web, running one of these newfangled “blogs” you’ve no doubt heard about, tore me a new one on this point, saying that it was just proof that I didn’t understand the whole je ne sais quoi of Spider-Man, that I was trashing something that I knew nothing about, blah blah blah. (Alas, I didn’t save the link for later brooding purposes.)

For those of you not following along at home, Peter Parker has finally, after much wheedling, managed to extract some HEALTH INSURANCE out of his skinflint, Hitler-lookalike boss. Unfortunately, our hero now must submit himself to the indignity of a physical, and he’s afraid his arachnoid physique will be revealed.

In the first two strips above, he’s busy dwelling on all this when, in one of the most blatant instances of strip-padding I’ve seen in all my years of comics-reading, a conflict is introduced (via a Truman-era intercom system) only to be resolved, with no action on the part of any of the on-stage characters, the next day. I can’t even begin to describe how deeply unsatisfying this is from a narrative and dramatic perspective. Imagine if Shakespeare had used this technique:

GHOST
Now, Hamlet, hear:
‘Tis given out that, sleeping in my orchard,
A serpent stung me; so the whole ear of Denmark
Is by a forged process of my death
Rankly abused: but know, thou noble youth,
The serpent that did sting thy father’s life
Now wears his crown.

FORTINBRAS
O proud death,
What feast is toward in thine eternal cell,
That thou so many princes at a shot
So bloodily hast struck?
Except for Hamlet, who wasn’t killed
Someone else offed Claudius instead.

HAMLET
Saved by the bell!

Peter Parker, meanwhile, proves that he has the proportionate IQ of a spider: not only did he forget to remove his “spider threads” before the inevitable “customary” medical exam semi-nudity, but he’s chosen to reveal said threads to provide a visual counterpart to his cretinous internal monologue. Sorry, Spidey, but for this desperately retarded move, you deserve a few days locked in a cage in some sort of clean room down at CIA headquarters. Good luck with that.

Anyway, to sum up: Spider-Man is dumb. But does Sunday’s Olivia Newton-John-derived teaser make up for it all? Not quite. But almost.

(Apropos of nothing, a few months ago the future Mrs. C. and I were cooling off in a wading pool at Paramount’s Great America when we saw someone walk by with a giant inflatable chunk of Spider-Man merchandising. She pointed out that it’s pretty hilarious to pronounce “Spider-Man” like it’s a Jewish last name, with the last syllable de-emphasized. As in, “Oy, why do we have to have Passover at the Spidermans every year? There’s always this weird webbing stuff in the haroset.”)

Meanwhile, proving that Peter Parker is not in fact the dumbest character in the comics, let’s take a moment to enjoy Scott Gaines’ little oops-I-proposed-by-accident temper tantrum.

Because if you think she’s going to be turned off by a blurted-out proposal, wait until she gets a load of the post-blurted-out-proposal hissy fit.