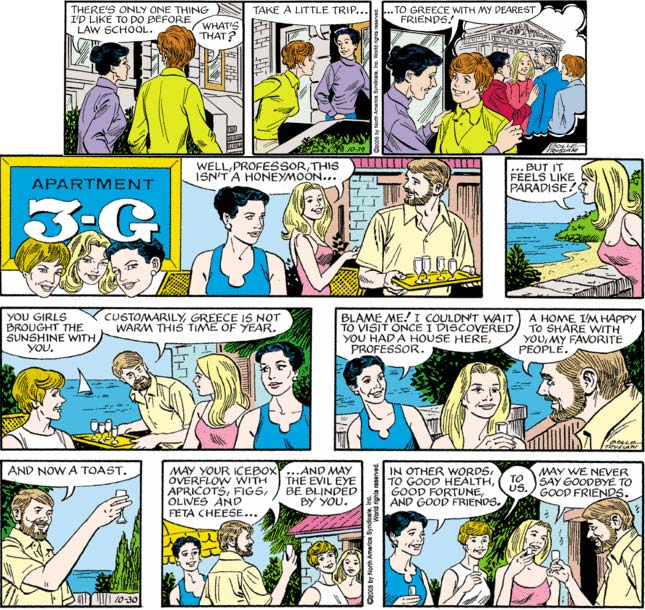 How heartbreakingly sad is Tommie’s look of pathetic, unbearable happiness in panel three of Saturday’s strip? I can think of two possible reasons for her joy, each more depressing than the next:

In her little fantasy balloon Saturday, Tommie makes the elementary error of assuming that the Parthenon is within 150 yards of every location in Greece. By Sunday, our skimpily dressed trio of roommates have already discovered that this is not true, as they’ve decamped to Lesbos. (Yes, Lesbos. Let’s all make the “Lesbian” cracks in our heads and then move on, shall we?) I’m disgruntled by the Professor’s “brought the sunshine with you” comment; since, unlike FBOFW, Apartment 3-G does not take place in real time, this little island getaway could be happening any time of year, so I’m not sure what the point of establishing the weather as abnormally warm is, unless we’re setting up an exciting new plotline where the girls control the Earth’s climate with their minds.

What’s mostly impressed me about this little scene, though, is how it smacks of story-wrapping-up-time. Mary Worth takes weeks and weeks to kill each of its plots, then beat, dismember, and burn their corpses and scatter the parts in strategic locations around town. Apartment 3-G just dumps the bodies of its storylines in the river: no fuss, no muss. Sure, Lu Ann’s just seen what she thought was a relationship that was going to last the rest of her life go down in flames, and the man she once saw as a paragon of selflessness was revealed as a self-centered control freak; but a little walking around Manhattan and quick vacation in the Aegean and she’s apparently good as new! I’ve said it before and I’ll say it again: life’s pretty easy when you’re dumb and shallow.