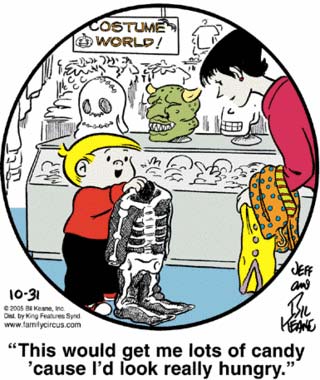 Just in time for Halloween, the comics are full of SCARY SKELETONS! AAAAHHH! AAAHHHH! Actually, I’ve never quite got the handle on why skeletons are supposed to be scary. I mean, I get vampires (blood-drinking, transforming victims into damned undead), zombies (brain-eating, rotting flesh produces foul odor), werewolves (razor-sharp claws, poor self-control), Frankenstein’s monster (product of perversion of the natural order in which man plays at being God, very tall), and such. But skeletons, well … they’re just bones, aren’t they? Sure, if they walked the earth on their own power, it would be … unsettling, but without muscle mass, how much harm could they really do? Mostly they make me visualize an anthropology lecture, which isn’t “scary” so much as “boring.” (I’m leaving aside for the moment here the skeletal grim reaper, who’s scary not because he’s a walking skeleton, but because he has a creepy robe and a boss scythe and can take your soul to the underworld.)

Anyhoo, the Family Circus and Beetle Bailey both seem to realize that the kids today, they’re not afraid of an animated bag of bones like they used to be, so they’ve come up with a harder-hitting twist: visible bones = malnutrition. Little Billy, always on the make, is planning on exploiting concern for his pathetic, wasted state to get more goodies from the bleeding-hearts in his neighborhood. Check out the little smile on Mommy: she knows that she can remind Billy of this moment if he ever goes soft and wants to donate the family’s hard-earned booze money to some little brown children starving in some filthy third-world hellhole.

Beetle Bailey, meanwhile, seems to have forgotten it’s Halloween altogether, but it still manages to convey sheer terror on the part of Sarge. Convinced to head off-base as part of the lamest 48-hour leave in the history of the US military (Museum? Museum? Where are the whores, soldier?), our portly sergeant is brought face to face with the prospect of his own mortality in the form of some of the most poorly-executed dinosaur skeletons I’ve even seen. While the idea of being reduced to a hulking set of bones has clearly shaken Sarge to his very core, at least he’ll now have the strength to resist the relentless, anorexia-inducing body image peer pressure that is the Army’s secret shame.