Check out the turtle-mouthed death’s-head look that the hateful Lil Skinner is sporting in panel one. You don’t know how much I wanted this to be the harbinger of the horrible truth: that Lil really was dead, and that Slim was carrying on a week’s worth of Norman Bates-style insane conversation with her withered, husk-like corpse. Unfortunately, Clovia seems to see her alive and well in panel three, so I guess we’re stuck with yet more hijinks from the comics pages’ most transparent sociopath.

OK, OK, Rex Morgan, we get it, OK? You like to look up Rex’s nose. But why do you have to make us look up his nose so often? 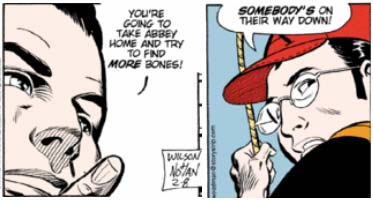 Now, I mock Curtis a lot. I’m a Curtis-mocker, it’s fair to say. But I do like the art, and it’s growing on me more and more over time. What comic would spend time lovingly detailing a large, late-middle-age woman with a gynormous bosom as she levitates three feet off the ground in wide-eyed panic? Curtis would, that’s who. And I for one salute it.

Speaking of sociopaths, I’m guessing the perpetrator of this arachnoid outrage is none other than “Tuffy,” the kid who brought a gun to school a few weeks ago; it turned out to be a squirt gun, but it still would have gotten him sent to a lock-down facility in any actual school district in twenty-first century America. His capacity for over-the-top mischief seems matched only by his unfounded loyalty to Curtis, which could result in discomfort-causing storylines far more intriguing than that damn invisible lizard’s latest antics.