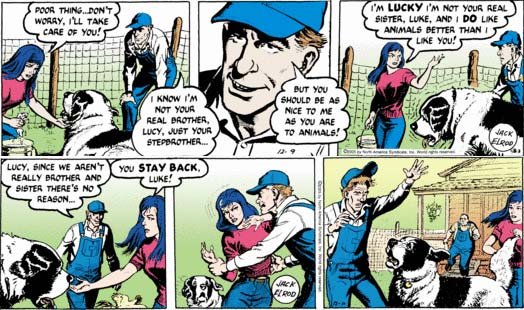 I never would have pegged Jack Elrod as part of the chardonnay-swilling liberal real-American-hating elite, what with his love of the outdoors and camping and hatred of swarthy people with facial hair. Still, this latest plotline has managed to indulge in just about every vicious stereotype about the proud, overall-wearing rural folk that make up the moral backbone of this great country: that they’re stupid, they’re lazy, they wear overalls all the time, they’re by and large hideously unattractive (except for the young womenfolk), they refuse to give up pet-napping for honest work, etc. Just about the only slander that we’ve avoided has been the one about incest and sexual depravity … until now. Yuck. Thanks, Mark Trail, thanks a lot. Still, I have to admit that I like the wordless tableau in the last panel of the second strip: Andy the hero dog valiantly comes to the aid of our blue-haired heroine, with Scrawny Hillbilly Dude stumbling backwards, his dumb hat falling off of his stupid head. Meanwhile, No-Neck Hillbilly Dude is lumbering into action in the background, afraid that his dreams of “over a thousand bucks!” are going to vanish in a fit of intrafamilial squabbling. 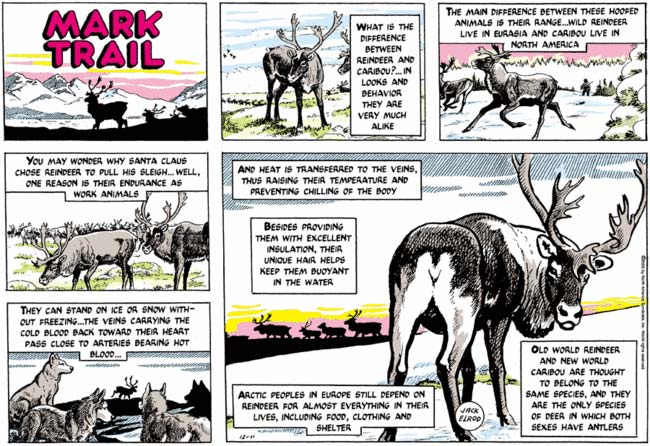 Yes, I’m sure that, when choosing the beasts that would pull his sleigh, Santa gave careful consideration to reindeer’s endurance, their special heat-spreading circulatory system, their “unique hair” … and also the fact that they can goddamn fly. Sheesh, Mark, for a naturalist, you’re sure leaving out some important details.