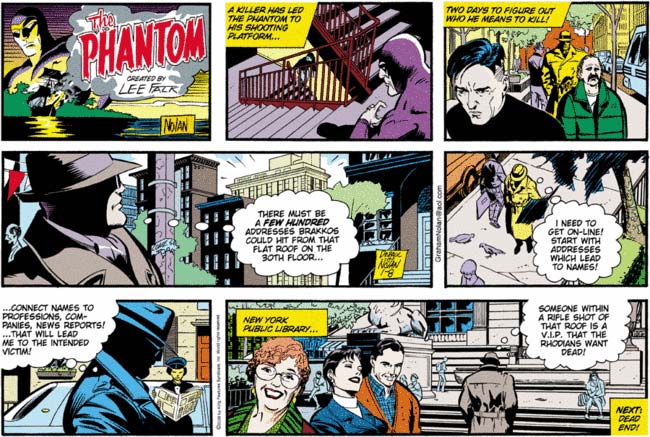 Keen-eyed readers spotted Rex and June Morgan, out for a stroll in Manhattan, in the final panel of this Phantom comic. (This makes sense, to the extent that anything that happens in either of these features makes sense, because the Sunday Phantom and Rex Morgan, M.D. are both drawn by Graham Nolan.) Harder to identify is Little Orphan Annie, now 52 and nearsighted, but with normal pupils restored after six agonizing surgeries, grinning out at us from just to their left.

Least exciting sentence ever in an ostensible “adventure” comic: “I need to get on-line!” I’m really looking forward to next Sunday’s Phantom installment, featuring Google search after thrilling Google search. My appetite is just whetted by the adrenaline-fueling “NEXT: DEAD END!” teaser box.