Um, just in case you were wondering, Dick Tracy is like TOTALLY NUTS now. How much do I love the thinly veiled Osama bin Laden character in panel one, who is wearing what appears to be a blindfold across his nose, presumably so that he doesn’t breathe in the stink of the Great Satan over his enormous cell phone? I love him a lot, that’s how much. A commentor said that they thought that “Al Kinda” (that’s the fellow apparently holding a much smaller and more modern cell phone with his foot in panel two) was an Arab caricature, but I don’t see it; he looks to me more like the reanimated corpse of Ronald Reagan. (The thought of a zombie Reagan working for Muslim terrorists is so delightfully bizarre that I shudder just to think of it.) The leftmost guy in panel three may look like an ethnic caricature, but he’s actually recurring character B.O. Plenty; I can provide an explanation neither for his name or his hat, just as I cannot explain the rightmost person in that panel, who I think is supposed to be either a woman or a man in the least convincing drag in the history of cross dressing. Either way, I’m beginning to believe that Dick Tracy demonstrates some of the loopy, deranged majesty as Gil Thorp, though not at the same manic pace.

Meanwhile, in Mary Worth: Don’t turn your back on her, Lou! She’s about to deploy her Power Palm! 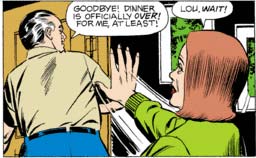