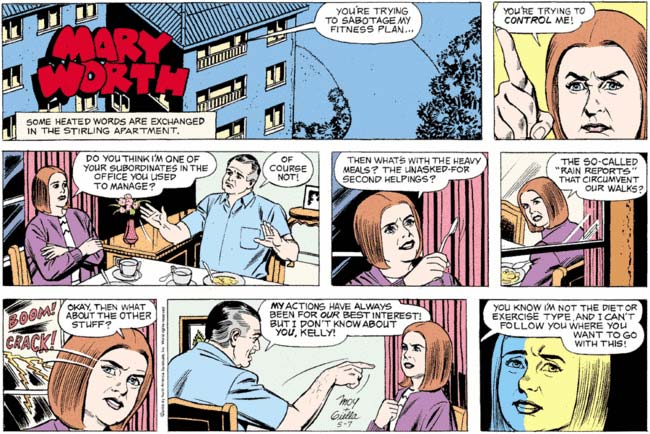 STIRLING VS. STIRLING! BATTLE ROYALE! WHO WILL BE THE WINNER? As near as I can tell, it will be whoever can point the most vigorously. Kelly got into an early lead in panel two, with a triumphant index finger nearly poking out of the frame, but Lou comes back strong in panel seven with a point so powerful it leaves motion-line streaks behind it at two different angles. The sheer rage of this emotional combat is in fact reflect by the motion lines everywhere — trailing Lou’s hands, radiating from Kel’s spoon, and smearing off of the sides of her eyes as even nature takes sides against her.

That’s a pretty nice rant Lou’s worked himself up into by the final panel. “And I can’t follow you where you want to go with this!” Jesus, man, she’s not planning on murdering schoolchildren and then selling their organs for crystal meth money; she just wants to take a walk once in a while. Chill!

In other news, I’m going to have to revisit something I said last month. I claimed that a recent Phantom that featured Mrs. Phantom changing in a moonlit mountain clearing was one of the most gratuitous moments in newspaper comics history. But I clearly didn’t know the meaning of the word gratuitous until today: 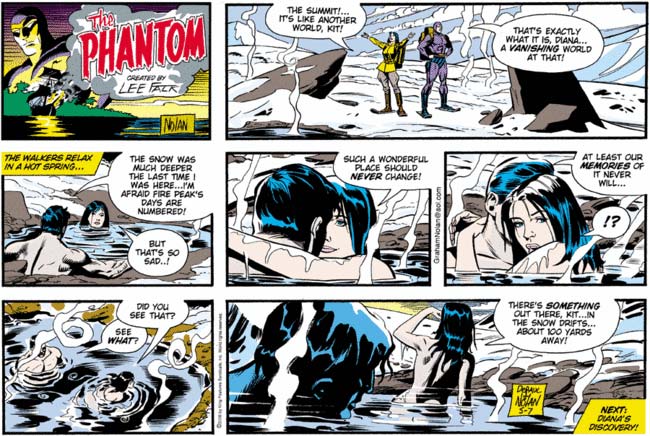 “There’s something out there, Kit … I’d better expose my breasts to it!” But just in case you get so hot and bothered that you forget that you’re reading the Phantom, panel five reminds you: it may be the first instance of comics erotica to feature this strip’s trademark interrobang.