I must admit that I’m a little puzzled about what might not “go well” and extend Dr. Jeff’s stay in Cambodia. Is he concerned that three months might not be enough time to repair every cleft palate in the country? Is he worried that one of the 152 heroin-filled condoms he plans to swallow is going to burst while he’s in the air? Does he think his charisma might be so overwhelming that he’ll inevitably become the head of an apocalyptic rebel movement that worships him as a god? Is “Cambodia” a code word for “the next town over, after I’ve done the painstaking work of changing my identity?”

In her grief, Mary has joined the “people who stab themselves in the throat with off-colored food-style substances” club.

This, on the other hand, makes total sense. Hey, Tommie and Lu Ann, you wanna know why this site has a “Finger Quotin’ Margo” contest and not a “Head Bobblin’ Lu Ann and Tommie” contest? You wanna know why you’re losers and Margo’s a winner? This is why. Seeing Margo utter the phrase “parading her hottie boyfriend” is like having a present you’d wanted all your life, but not realizing how much you needed it until you received it. In all the excitement of rubbing her roommate’s faces in things, you can understand why she’s neglected her morning hair dying. That’s OK, Margo; the salt-and-pepper look becomes you.

Speaking of the Finger Quotin’ Margo contest … I fear I must confess that I’m having a very busy week, work-wise and otherwise, and can’t dedicate the psychic energy required to really judge effectively, so look for the contest’s resolution early next week. Honest. But in the mean time, here’s some stuff to entertain you. Faithful reader Kaycee sent me one of the most awesome objects ever put together with stuff purchased at the dollar store: the Finger Quotin’ Margo Action Figure! 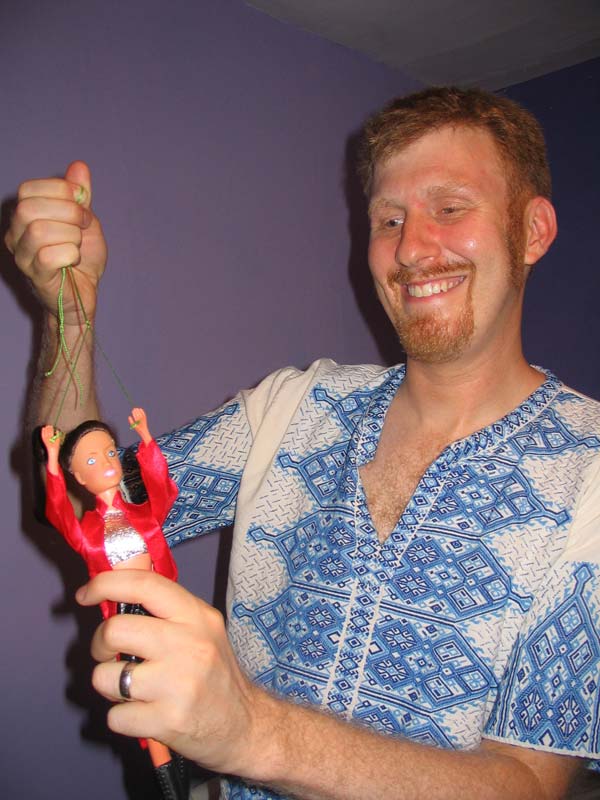 Note the strings, which you can use for true finger-quotin’ action. Also note the hooker boots.

“Josh,” you might be saying, “I think your stalling makes you lame, but I guess I can’t make you come up with a winner on my schedule. But still, I’ve got a yen to compete! What sort of contest-y things can I get involved in?”

Well, I’m glad you asked. First off, if it’s lookalike contests you crave, why not head over to Drink At Work’s Medium Large Guy Lookalike Contest? It won’t make much sense if you don’t already read the stellar Medium Large Web comic, but you really ought to be doing that anyway, as it’s been on fire lately. Thrill to the adventures of Victorian-Era Superhero (the summer replacement for Teenage Girl President), check out T.O.D.D.’s special brand of whimsy, and peek behind the scenes at new character development. You’ll be glad you did!

The next option is a bright idea from commentor Fred P., and I can’t say it any better than him:

Well, I’m sure we may be all — I know I am! — suffering from the early whiplash symptoms of contest-o-mania after the whirlwind of excitement, heat and flash that was the FQ’nML-A-L Contest, but I sure got my sporting blood flowing. So allow me to humbly suggest one more competition. Now, we can’t impose upon Josh the burden of adjudicating, because he has already taken on the unenviable task of choosing between a field of such staggering perfection that my mind, for one, is truly boggled. So, why not have the brain trust at, say, chiefplugr@aol.com be our next judge? What I am proposing, ladies and gentlemen, is a race. A race to see which of us will be the first to have a submission featured in either TDIET or Pluggers! So make up some preposterous nincompoopery now! Submit early! Submit often! Remember, you have nothing to lose. And if you win, you will revel in eternal glory! Eternal that is until next Thursday, when the recyclers pick the old newspapers up. Oh yeah!

(And on that note, I might direct your attention to “Crap Every Time, a new blog dedicated to mocking TDIET full-time. All I can say is that I admire the dedication and personal sacrifice required.)