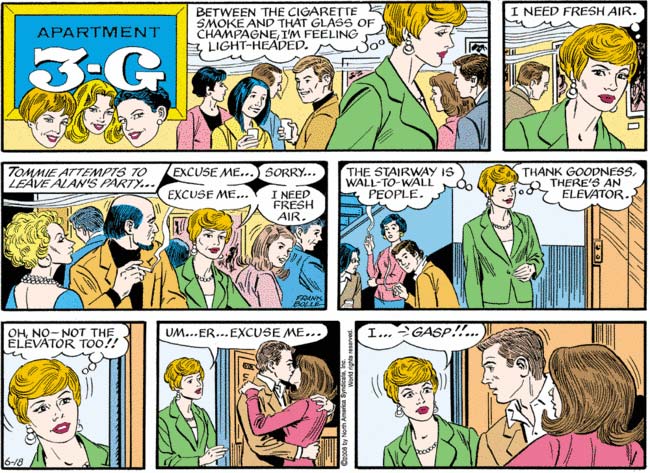 As Mrs. C. pointed out to me this morning, this shocking revelation would be more shocking if the characters in Apartment 3-G were drawn well enough to be distinguishable from one another. Based on the hair alone, I’m guessing our lovers in an elevator are Tommie’s friend Lucy (Mary Tyler Moore-esque flip) and somebody who isn’t Tommie’s friend Lucy’s husband Ted (not black). Poor Tommie’s been driven into a frenzy of head bobbling by the double whammy of “AHHH, PEOPLE MAKING OUT THE ELEVATOR!” and “AHHH, SOMEONE I KNOW MAKING OUT ADULTEROUSLY IN THE ELEVATOR!” Of course, she’s already noted that she’s been made a little woozy by the combination of booze and “cigarette smoke”, so she’s really primed for a little head-bobbling action. Check out the bald beatnik and sassy minx in panel three … everybody at this party has head bobblin’ fever!

Longtime Apartment 3-G readers know that this strip loves the big elevator-doors-open-to-reveal-smoochery gimmick. If memory serves, that’s how Margo found out that Lu Ann was dating her ex, FBI Pete. It’s just one of the hazards of living in a vertical city like New York, I guess, especially if you can’t handle being alone with someone for thirty seconds without sucking face.

I’m all for gentle humor, in principle, but this punchline is so gentle that it takes two panels to roll into place, then makes no impression when it finally arrives. Maybe if the joke had been more hilarious, it would have distracted from the young female character wearing Daisy Dukes and a belly shirt in the final frame.