Oh, c’mon, Jim, forget this “dividing your ashes” stuff: why not just dig up Marian, bring her back to Ontario, get a place with Iris, and then: yowza! Posthumous three-way!

OK, that was in poor taste. But I had to do something to distract myself from Iris’ grim, death-like visage in the final panel. I mean, Jesus, it looks like she’s ready to drag him off to the underworld right now. 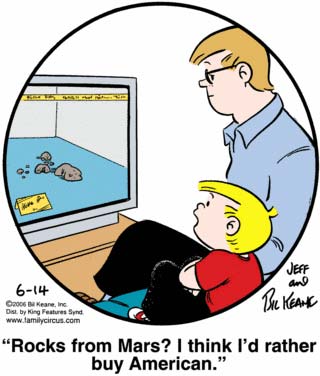 Ignoring the weird jingoism of this panel for the moment, I have to ask: what the hell are these two watching? Is it the Pictures Of Rocks Against A Blank Background With A Little Folded Index Card For A Label Channel? The ticker across the top of the screen would seem to indicate that they’re watching a cable news station of some sort, but surely there’s an attractive white woman missing somewhere that could preempt this crap.

Anyway, Billy, you just wait until Operation Martian Freedom is launched sometime in late 2007. Then you could can buy your space rocks without adding to America’s trading deficit, because we’ll own Mars’ shiny red space ass.

Holy crap, did the crazy roller-skating bird from Shoe just get propositioned? I’m so stunned by this development that I can’t even work up the energy to feel sorry for him because he screwed it up.

See, this is why we all love Satchel. Because when he wants you to be appear on a game show that he invents, he hand-delivers a formal invitation. In a sealed envelope.

I’m intrigued by Rob’s claim to be a “grown-up.” I’m not convinced, based on the evidence I’ve seen. 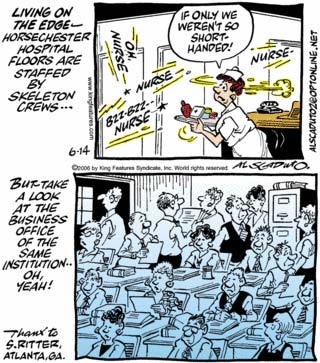 TDIET takes time out from its usual fare — which is to say the insane, petty rantings of octogenarians — to illuminate the deep structural problems in America’s health care system. This is material so politically charged that usually only Rex Morgan dares to handle it, but TDIET discusses the crisis in its own trademark fashion: by ending with “Oh, yeah!”