I think if Samuel Beckett were to write a comic about the meaningless empty void at the heart of a lonely, embittered old woman, it would look something like this. He’d leave out the reaction shot in the third panel, though; Momma’s depressing hobbies speak for themselves. 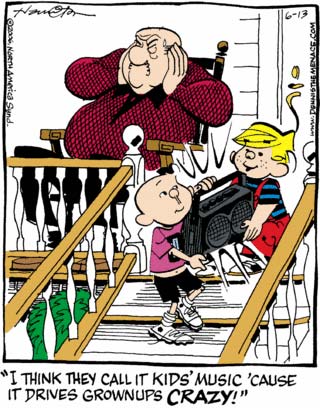 While appreciate the fact that Dennis is annoying Mr. Wilson with some 50 Cent or Korn or whatever the hell it is kids listen to today to annoy old people, and the fact that Joey is continuing to wear that incomprehensible pink belly shirt, I have to say that after some exhaustive research I’ve come to the conclusion that this panel contains no jokes of any kind. Ignoring for the moment the fact that nobody actually calls it “kids’ music”, the sentence is set up so that it seems like “drives grownups crazy” is supposed to be some play on words, despite the fact that it so clearly is not. Instead, Dennis is just saying “We like music that they don’t!” Mr. Wilson should punch him.

“I have to hand it to you Kelly! Living with a knife-wielding stab-frenzied maniac like me! I know it isn’t easy!”

Seriously, I hate to call for a savage knife attack, but it’s the only thing that would liven this up. She’s got one too — maybe they can manage to kill each other off, Hamlet-style.

Note to Hi and Lois: if you draw your punchline and then have to have a character explain it, it’s probably time for a rethink.

In Finger Quotin’ Margo news, it looks like even Hollywood superstars are trying to get in on the action. Check out the video below; around the thirty second mark, you’ll see Britney Spears perpetrate the most misguided finger quotes in the history of television journalism.

(This is the first time I’ve tried to put one of these YouTube thingies on my site, so let me know if it causes something to go horribly wrong.)