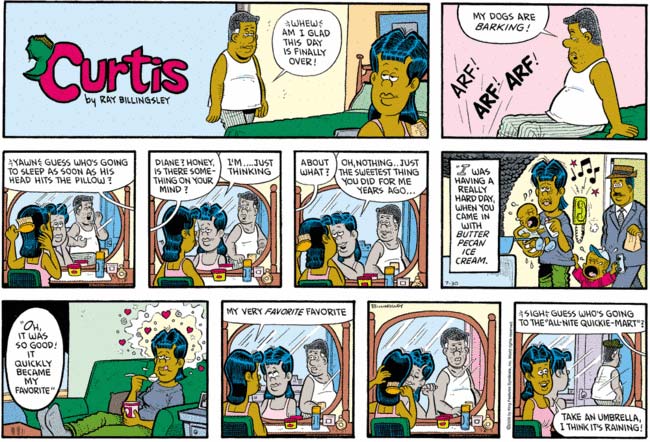 Here’s a good candidate for the “When Ambitious Artistic Gambits Go Bad” file. Ma and Pa Wilkins are having a nice little bedside chat, gazing lovingly at each other in their bedroom mirror. It’s an interesting technique that establishes the mood well and offers a different angle on what could have been a typical scene. Unfortunately, the fact that Mrs. Wilkins’ word balloons seem to be emanating from her reflection, while Mr. Wilkins’ come from off-panel in the direction of his actual body, make it look like there’s a third person in the room doing the talking. The effect is deeply, deeply unsettling, at least to me.

To note: Mr. Wilkins’ spiffy mustache in the flashback panel. Best not thought about: the egregious “barking dogs” imagery in the throwaway second panel. 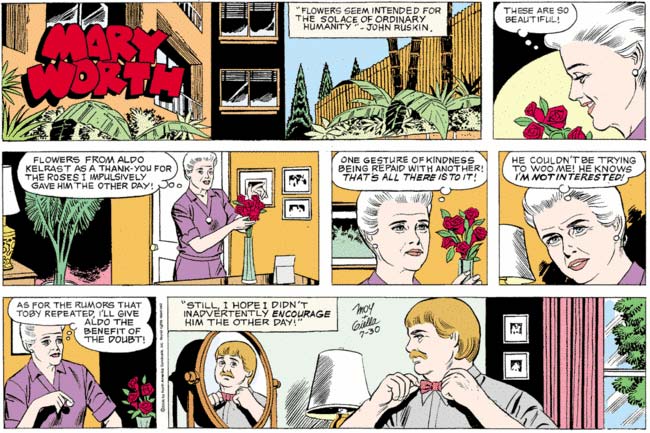 Look at Aldo’s reflection in the final panel: while his actual face makes him look grimly determined to get his stalk on, his reflection looks nervous, timid, and unsure. Perhaps we’re looking at a dichotomy like the Green Goblin’s in the first Spider-Man movie, where the real-life Aldo plots evil and nefariousness, while the mirror-Aldo represents his conscience and tries to prevent him from killing and dismembering yet another grey-haired morsel who won’t submit to his advances. At any rate, this may be the first instance in any visual medium in which a man puts on a bow tie to presage his murderous intentions.

Throwaway panel item of note: the Charterstone homeowner’s association has apparently approved the construction of some sort of bamboo Great Wall, no doubt to keep the riffraff out. The presence of the evil Mr. Kelrast illustrates the folly of such measures.