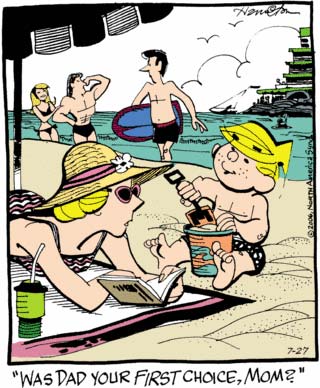 I’m not sure if that’s Mr. the Menace in the background with the surfboard, but Dennis clearly is learning at the beach that his dad’s no paragon of hunkery. In this twisted act of marital warfare, he shows that he’s taking his menacing out of the world of mere mischief and into the dark realm of psychological destruction.

Yeah, because it was so much more naughty back when it was up … on her … thigh? My guess is that in the original joke, the tattoo was somewhere a bit below something a lot naughtier (on her stomach?) and then the powers at be forced the poor strip back into the Herb and Jamaal Prison of Blandness and Inoffensiveness. (It’s not the first time it’s happened, either.) 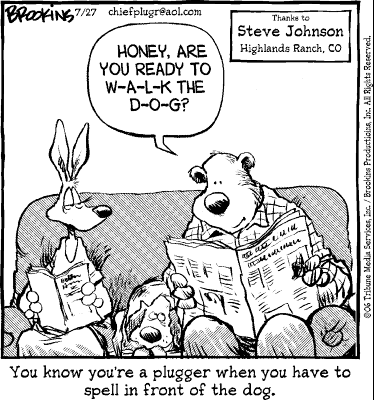 OK, even when I hate Pluggers, I generally get Pluggers, but this is just baffling. Do non-Pluggers hold their dogs in such contempt that they just say things that excite them, not caring about the emotional roller-coaster ride it puts them on? Do non-Pluggers just have extremely stupid dogs? Or maybe it’s that Pluggers are themselves quasi-beasts, and so their language is close enough to that of the true dogs that interspecies communication is almost possible? Or maybe, just maybe, it’s stupid and doesn’t make any sense and DAMN YOU PLUGGERS FOR MAKING ME THINK ABOUT THIS DAMN YOU STRAIGHT TO HELL.

Anyway, if you’d like a little Pluggers spoofery from the fellow who brought you that TDIET takeoff the other day, click here.