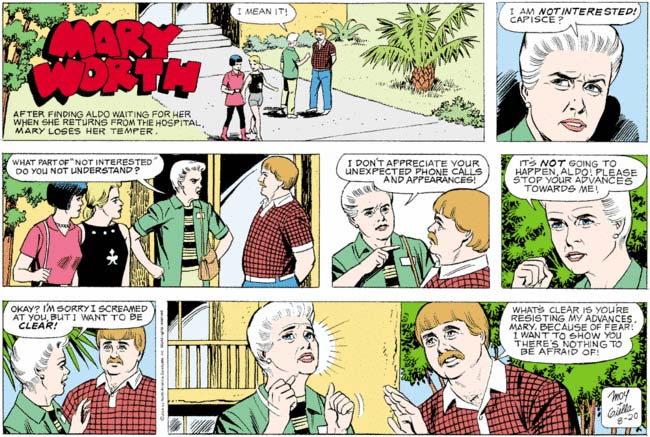 When am I going to stop putting up Mary Worth every day, you might ask? Oh, right about the time it stops being so incredibly awesome. We’ve seen Mary P.O.’d before, but I think this is probably the first Mary Worth in the strip’s 70-year run that just features of panel after panel of entirely justified invective. Just seeing Mary say “capisce” would have been enough to allow me to die a happy man, but that’s just the beginning! AND STILL HE DOESN’T GET IT! I’m really looking forward to whatever it is Aldo has to show Mary that will assuage her fears. For Mary’s sake, I hope it’s not a scrapbook full of pictures of her with all the eyes carefully cut out. Or his genitals. HAND JIVING WON’T SAVE YOU, MARY WORTH.

This may be as good a time as any to note that Aldo appears to have a MySpace account. (WARNING: Loud, craptastic music plays when you open this page.) 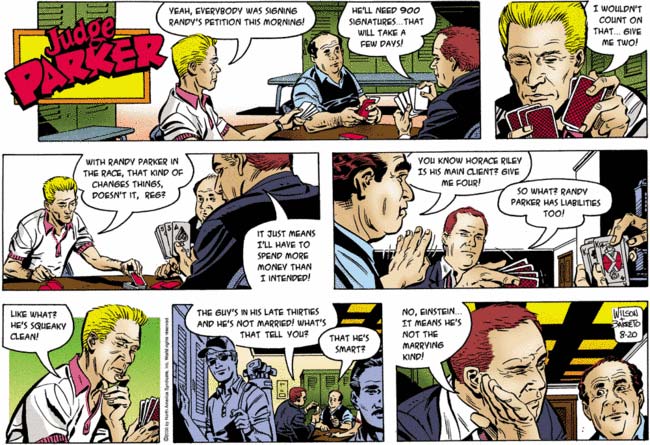 Perhaps almost as awesome is the prospect Randy’s run for judge being derailed by a slanderous, homophobic whispering campaign. Will Randy call April out of CIA training and have her “work it like a claw” live on TV, proving his heterosexuality and thus his fitness for the bench? God, I love politics.