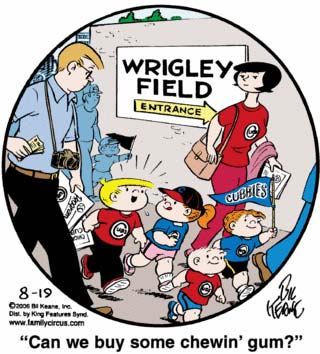 As the Family Circus family’s rerun trip to Chicago wears on, I was struck by just how damn excited Billy looks here. Not only is he radiating lines of pure joy, but he’s actually drooling. Either he’s had a sudden epiphany and now realizes how global megacorporations control every aspects of our lives — from the names of our great sports stadiums to the manufacture and marketing of the cheapest of grocery items — or he really, really likes gum. Honestly, I’m betting on the latter. Dolly looks pretty thrilled by the prospect of chewing on some Doublemint too, but mom and dad just sport numb, stuporous looks. Presumably they’ve realized that all the money they’ve just spent on baseball tickets and overpriced hats and t-shirts — to say nothing of hotel and airfare — has gone to waste, because they could have entertained their kids just as much by giving them a dollar and sending them to 7-11 to get some Bubblicious.

Oh my God, Paul needs a sex ed refresher, stat! DUDE, IT DOESN’T WORK LIKE THAT.

Oh, wow. I for one have longed to refer to Spidey as a “costumed cretin” for some time. And to do it in an effete, slightly English accent. And to bash in the back of his head with a lead pipe. This has got to be the most satisfying Spider-Man ever.

In fact, this installment so pleased me that for a minute I failed to grasp its import. Spider-Man has singularly failed to battle a real live supervillain since April of 2005, and now we see why: he’s been easily neutralized by Narna’s totally non-super manservant. Why didn’t your spider-sense start tingling while Hugo was sneaking up on you with a bludgeon, Parker? Does it somehow magically not work on butlers? Christ.

Aldo’s fingers in panel two provide a good counterpoint to his dialog. I think he’s got a pretty accurate sense of the size of Mary’s black, shriveled heart.