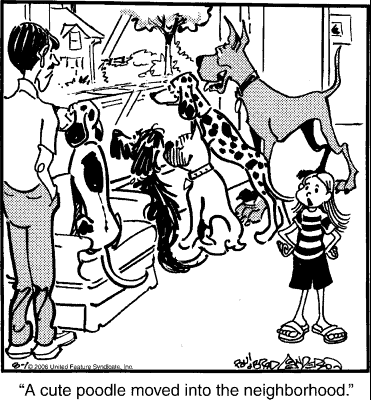 You ever think that maybe male poodles (who by my guess make up about half the poodle population) get tired of the poodle being the epitome of sexy cartoon dog femininity? It’s not their fault if they have to have the girly haircuts. On the other hand, how do I know that all these randy dogs lined up on the couch are boy dogs looking for some lady dog tail? This could be a big doggie buffet of canine polymorphous perversion. I saw a dog hump an ottoman once, so they can’t really be that discriminating.

Al Kinda, who so far has proved to be al Qaeda’s most incompetent terrorist mastermind, manages to pull off something special in panel two: history’s longest-distance pistol-whipping. Seriously, I don’t think that Capitol cop got within ten feet of that gun. Maybe after the Cynthia McKinney incident, the Capitol Police are all just taking a dive whenever anyone swings something cell-phone sized at them, just to keep the media circus to a minimum. Or maybe Kinda’s wacky outfits have something to do with his abilities to work spooky Levantine magic.

Considering this is Bucky, he’s being remarkably thoughtful by doing it in the bathroom. More than I can say for some rubber-band eating cats I know and live with.