Is there anything more delightful than seeing Kelly Welly repeatedly throw herself in the path of killer grizzlies as part of an ill-conceived plot to advance her career and/or bed a rugged outdoorsman — any rugged outdoorsman? Well, maaybe Mark describin the situation with a sentence that would never spontaneously come out of the mouth of any under the age of 85. We could spend the rest of the summer in a continuous Kelly-does-something-foolish/gets-menaced-by-bears/gets-rescued-by-Mark-and/or-Rick/gets-yelled-at-by-Mark/makes-eyes-at-Rick-and/or-Mark loop and I would still be a happy guy.

Speaking of delightful: I don’t have much to say about today’s Mary Worth, except that today’s second panel might be one of the most pleasing Mary Worth panels in many a moon. The only way it could be better would be if she actually hurled her grocery bags into the air, with fruit, cinnamon, and flour flying everywhere — but still, we’ve got Mary shouting “AAUGH!” and radiating panic lines as a bow-tied Aldo Kelrast appears out of nowhere, so let’s not look gift horses in the mouth! In fact, let’s all bathe in the comforting glow of its pleasingness: 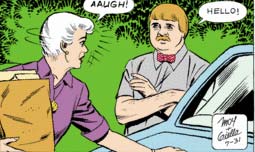