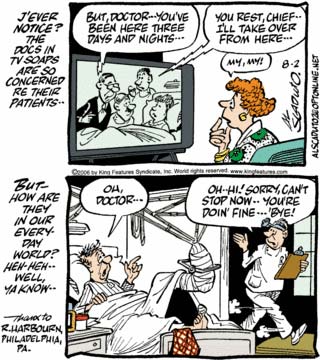 Some might say that my incessant fawning over TDIET has left me without any kind of credibility when it comes to this feature. I’m just some sort of TDIET cheerleader! Well, today I’m here to tell you that it just isn’t so. See, today’s installment of this usually totally awesome panel undermines exactly what makes it totally awesome. Generally, the patented TDIET twist involves the same person or people or institution: it’s like, Titus notices shoddy work, but not the tip jar! or hospitals have too many bureaucrats and not enough health care providers! or the Pestleys insist that other people be clean, even though they’re messy! Today we’d have the perfect opportunity for that favorite TDIET theme, in which some happy, naive person believes that some aspect of life is basically good, only to be disabused of that notion in some shattering way — except that it only works if the person in the hospital is the same person watching the TV! Instead, our red-headed lady is going to go through life believing that doctors are great and attentive, and our poor patient has never had his hopes about medical care raised so as to be dashed in a narratively pleasing way. Presumably this discrepancy arises because the artist is too gentlemanly to draw an injured woman in a hospital gown, and too sexist to imagine that a man might watch soap operas.

Say, have you ever wanted to see a comic strip where a little girl punches another little girl in the face? Well, today’s Gil Thorp is for you, my friend.

I thankfully don’t have any seven-to-ten year olds that I need to shuttle back and forth to gymnastics practice, so maybe somebody can tell me if gymnastics coaches actually wear form-fitting spandex leotards to work. And are sexy, sexy ladies.