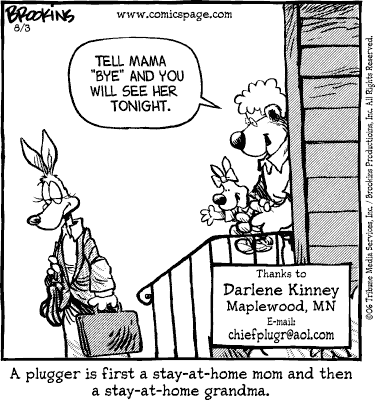 Sooo … Grandma’s a Plugger, daughter-in-law isn’t? Oooh, mixed marriage: edgy. Daughter-in-law is wearing a suit and carrying a briefcase, so she’s clearly some sort of ball-breaking feminist lesbian professional woman. I see a kidnapping/multi-state chase in the near future, followed by a circus trial in which the “a working mother is by definition a child abuser” argument serves as the main defense.

Of course, they had to clean it up for the funny pages. I have it on pretty good authority that this is what Mary actually said:

“Is this some sort of motherfucking joke? Huh? Does it look like I’m motherfucking laughing to you, motherfucker? Get your punk-ass hands away from me!”

And then it just sort of goes on like that for a while.

Even without the cussing, I think I can say with some confidence that there’s only one other person in the last two years who’s made Mary this mad:

That’s right: Aldo Kelrast is now officially as awesome a Mary Worth character as Rita Begler. After a lull of some months, this strip is back on top of its ridonculous game.

“That’s right, on my legs! My long, smooth, totally unscarred legs! So you see, we’re really a lot alike, except in all the ways that actually matter for this discussion. What I’m trying to say is, I want you to wear this bag over your head at the next meet.”

“Thanks for showing me the outside of your wallet, detective! I’ll do anything you say now.”