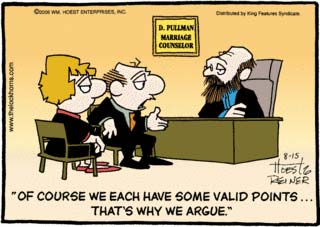 Today’s Lockhorns is evidence of the feature’s unrelenting commitment to total authenticity. It’s not that one of them is right and the other cartoonishly wrong, you see; it’s that they are fundamentally incompatible, and yet married to one another. I’m not sure that this comic contains a joke per se; rather, Leroy and Loretta in a larger sense illustrate the basic reality that our lives and our interactions with others are fundamentally absurd. They seem preternaturally inured to the hollowness of it all, but it’s often a wonder to me how their marriage counselor keeps from slitting his wrists.

Today’s Herb and Jamaal is like a magpie fascinated by a shiny object and unable to divert its attention from it. In this case, clearly the polysemous nature of the word “cell” — you see, it could refer to a cellular phone, or a prison cell! — provided an irony too delicious to pass up, no matter the fundamental problems of narrative that this gag presents. For instance, last I checked, you can’t actually call someone in his cell, because prisoners aren’t allowed to have personal phones. Of course, sometimes corrupt guards smuggle phones in to the inmates, but these are generally — you guessed it — cell phones. There’s a potential joke here about calling someone both in and on his cell, but clearly Herb and Jamaal doesn’t have the stomach for an exploration of the deficiencies of the American incarceration industry.

Anyway, despite the fact that the strip is totally unable to string 50 words in a row without creating a major plot hole, the whole thing is made worthwhile by Herb’s hilarious reaction shot in the final panel, right? Oh, wait a minute, no it isn’t.

Don’t feel too bad, though, Herb and Jamaal: for all your failings today, at least you didn’t do a can’t-program-the-VCR joke.