Baldo is one of those strips that I like enough to read every day, but it’s almost never so exciting that it gets mentioned here. This week there’s some serious oddness going on, though, as the title teen attempts to romance a bottle of conditioner. It was weird enough when it happened yesterday; its recurrence today is starting to freak me out. The fact that Baldo’s hair retains its perfect shape even in the shower may go to show just how intimate he is with hair-styling products.

One of the odder recurring bits in Beetle Bailey is Beetle’s extremely intermittent relationship with Miss Buxley. Although they are occasionally seen going out together or even holding hands, they seem to be perpetually on a second or third date. This is to my knowledge the first time that Private Bailey has even tried to get to first base with the buxom secretary, and the dialogue around the attempt is particularly bizarre. I myself have never been in the army, but I did go to public school, and so I know a thing or two about old water fountains, and if Miss Buxley thinks that the techniques needed to get water out of one makes a man a “good kisser,” then she’s much, much kinkier than I ever gave her credit for.

Actually, the more I think about it, Miss Buxley is probably not complimenting Beetle for trying to suck her liver out through her windpipe by asking him if he’s a man-whore, but rather saw him coming at her face with his lips ludicrously extended and is trying to come up with something — anything — to say to distract him from his advances. This fits in better with their body language, in which he’s grabbing her by the elbows and she’s bracing herself against his chest, and with the fact that she’s way, way out of his league. 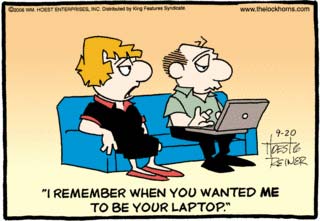