How much of a loser is Brad DeGroot? Well, I think it’s safe to say that he doesn’t exactly have a strong internal sense of interior design, so his enthusiasm for the house must be based entirely on its present decor. And since this has been Mrs. Horner’s house for about ever, we can assume that it’s done up more or less like a home in a TDIET panel. (And let’s say nothing of the old lady smell.) This, then, is Brad’s dream crib. “Oh, the textured olive-green rug in the living room really goes nicely with the matching green glass chandelier, and … ooh, look! Hummels!”

Boy, I’m beginning to see why Rex might want to find comfort in the arms of another. Hmmm, you were held hostage at gunpoint for the better part of an afternoon? BORRR-ing! But wait! I have to make a few phone calls to my credit card companies? DAMN YOU, MYSTERIOUS PURSE-SNATCHER! DAMN YOU STRAIGHT TO HELL! June’s so angry she appears to be transforming into a Bratz™ doll in panel three.

So, where do you all think the Rex Morganians are going with this? My guess: Identity theft! Proving once and for all that June Morgan is no plugger. 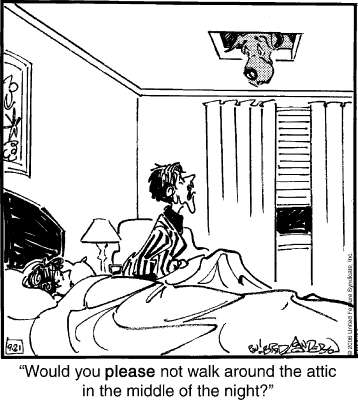 I couldn’t tell you why, exactly, but this image is for me by far the most unsettling one in the comics today. I suppose that’s supposed to be a trap door (that Marmadue opened from the inside?) but to me it looks like an arbitrary chunk of ceiling that’s been mysteriously removed so that the sinister Great Dane can just stare down at his owners with his huge, soulless eyes.