OK, look at the swivel lines in panel three, and compare to Margo’s head position in panel two. Either Margo briefly looked away from Lu Ann, then swung her head back to look at her in a classic doubletake that I feel very cheated for being denied (maybe she indignantly sprayed her coffee across the room at the same time?) or her head has spun completely around on its axis, Exorcist-style. Hell hath no fury like a Hat Man lover scorned!

Also: a stripey purple V-neck under a mauve vest is “dressing up” now? I sure didn’t get that memo. 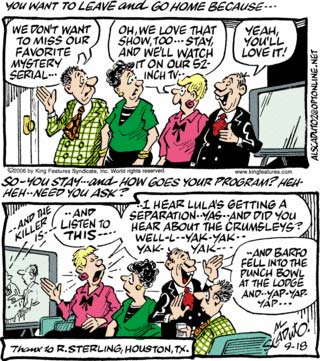 I love the fact that the patented TDIET-style outrage is being wielded entirely on the side of the couple who shuns personal interaction in favor of the warm, numbing glow of the television set. “Didjaevernotice: People invite you over to spend some quality time with ya … and insist on talking to you while the TV is on! Wha-a-a-a?”

I know I don’t talk about Popeye very much, but you should be kept appraised of the fact that it’s completely demented. There’s been this long, meandering “generation gap” storyline involving Sweetpea insisting that adults don’t understand him (don’t trust anyone over seven, man!), which, other than the fact that Sweetpea can apparently talk, didn’t faze me too much. But then he ran away from home, and Popeye was disconsolate, and Olive Oyl made a fake Sweetpea doll too fool Popeye and it worked. Today’s deranged strip pretty much speaks for itself in terms of how far around the bend this feature has gone, sort of the way a crazy homeless guy who’s constantly raving about OJ and the CIA and killer monkeys speaks for himself.