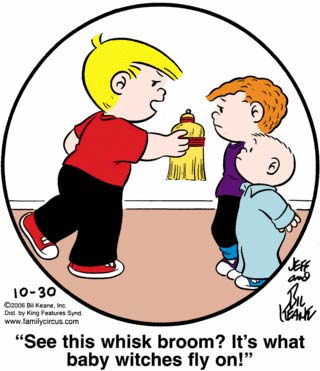 There’s always some sort of twisted psychodrama going on this ostensibly innocent little feature. Today, I’m wondering why Jeffy looks so damn depressed about Billy’s unfunny little joke. Some possibilities as to what might be running around his misshapen head:

OK, let’s for a moment assume that the crowd is going to go wild for the Hose-O-Phonium (which of course it wouldn’t in any rational world, but we are way past any rational world, baby). And let’s assume, against all evidence, that Uncle Phil really is the cool professional jazz-ish musician we’re told he is. And let’s assume that the endeavor on display here — the attempt of 4Evah and Eva to upstage the professional and talented (but still, of course, whorish and evil) RebaccaH — is a noble one. So, basically, Apes and her little friends are bringing in an adult professional to humiliate a thirteen-year-old. Nice. Shannon is so embarrassed by the whole thing that she’s attempting to escape through some kind of trapdoor in the floor, which is the only explanation I can come up with for why she comes up to about April’s navel in panel two.

Ah, Mrs. Dr. Morgan, always trying to bring a little positive energy and dignity to a thankless world. Because who cares if the people in line behind her have to wait even longer than she did, she’s determined to make friendly chit-chat with this underpaid bureaucrat. It’s a bad idea, though: check out the seam down the side of the teller’s face in panel two. That’s no human clerk, it’s a pitiless android, and when it says “the clock keeps ticking,” it’s in deadly earnest: if June uses up her allotted time and the transaction isn’t complete, the DMV-bot will vaporize her with lasers from its eyes. So let’s get a move on, lady.

So does it still count as an infuriating rehash if you get all post-modern and have one of the characters note that it’s an infuriating rehash? Yes, yes it does. Tune in next week when Luann has an awkward phone conversation with Aaron, and Bernice stands behind her with an enormous sign that says “NOTE: THIS STRIP IS ‘PHONING IT IN.'”