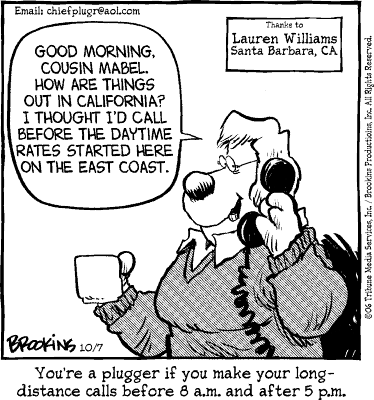 “Hi Cousin Mabel! How are things in California? What? 4:30 in the morning? No, I think you’re wrong, my watch says 7:30. ‘Time zone’? Oh, I forget that you crazy Californians always have to do things differently! Ha ha! Yeah, I know we go through this every time I call, but I just don’t understand why you silly liberals don’t get on real American time.”

Seriously, though, I can derive no other message from this strip other than “Pluggers will call you at a totally inappropriate time just to save a few cents a minute on long distance,” or, to put it more succinctly, “Pluggers are assholes.” I note that contributor Lauren Williams is herself an inhabitant of Santa Barbara, California, which is one of the lower plugger-density cities in America, so I have to assume that she’s not admiring the plugger’s thrifty ways but rather attempting to publicly humiliate her plugger relatives who call her in the dead of night. Sorry, Lauren, but you should know by now that pluggers don’t feel any shame.

Yeah, Raju’s going to have a pretty awesome time at that party, all right.