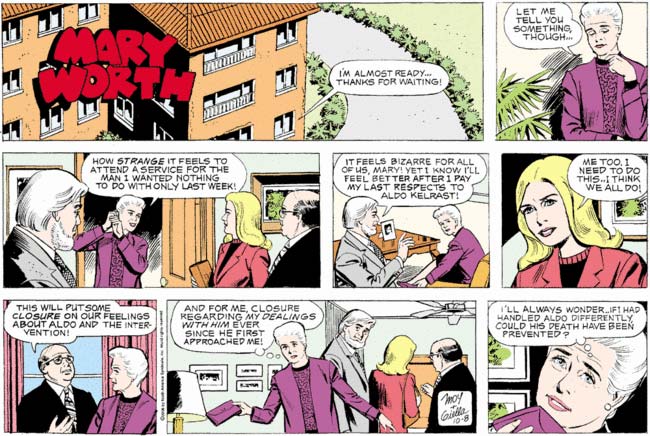 So as I was contemplating this strip on my computer screen with Mrs. C. looking over my shoulder, I said, “Boy, Mary sure is looking…” and she said, “LAVENDER?”

She’s right, of course, but the word I was looking for is smug. In fact, this whole quartet of murderers is looking awfully self-satisfied as they get dressed up for one last look at the mangled body of the man they condemned to an early grave. Mary looks in particularly good spirits in the last panel for someone who’s contemplating her degree of responsibility for a poor schmuck’s untimely demise. In fact, the only way that facial expression would make sense to me would be if you replaced “prevented” with “expedited.” “Could we have driven him to suicide even more quickly somehow and saved me some annoyance? What if we had dressed Toby up as the ghost of his dead wife and demanded his soul in exchange for hers? Oh, that would have been delicious! Too bad we’ll never get the chance now…” 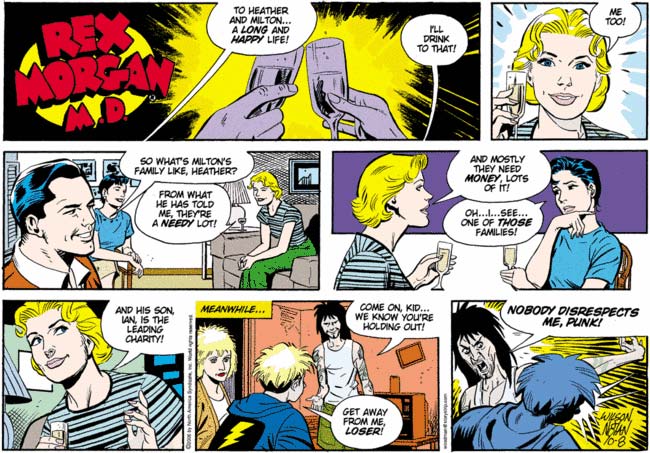 There’s been much buzz in the comments of this site about how and when Heather’s Brigadoon In-Law Adventure and Tommy Lee’s True Tales Of White Trash are going to link up, plot-wise. But now that we know that Milton’s family isn’t a bunch of kilt-wearing, Sassenach-hating Scots snobs but just poor, I propose an elegant solution to the problem: what if these lowlifes are Milton’s family, and Nikki (whose gender I still haven’t been able to figure out) is Milton’s son? You can’t hear accents in dialog balloons, after all. It would be a lot less Ivanhoe and a lot more Trainspotting, but would be entertaining nonetheless.