The Tommie and Gina storylines have reappeared … with a vengeance! All day before I had a chance to read this, I was seeing comments like “I think I saw this in a porn movie once,” yet I still wasn’t prepared for the oddness. I agree that the last panel doesn’t really make sense unless Gina’s smock-thing doesn’t cover her ass or something and she’s come to make the moves. Because the last person who you should be going to for fashion advice is Tommie, and the last person who should be making snide remarks about your manila smock-thing/sky-blue shirt combo is someone who looks in her closet and says, “Hey, you know what would go great with this dusty pink polo shirt? A gleaming white v-neck sweater!”

Still and all, I’m hoping the two of them go at it post haste. If nothing else, it would get them out of those hideous clothes. 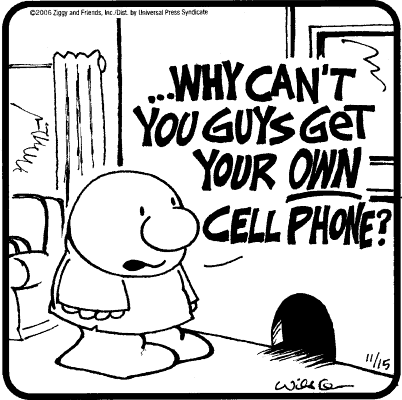 You know what would have made this cartoon marginally funnier? If we could actually see the mice making off with Ziggy’s cell phone. Or see the antenna sticking out of the mousehole. Or see Ziggy holding an empty cell-phone holder. Or really see anything that would indicate that this wasn’t one of hundreds of photocopies of a single pre-drawn “Ziggy talks to the mice” panel, all awaiting only the addition of “hilarious” dialogue and published at reasonable intervals so as not to be glaringly obvious.

(Note for libel purposes: I’m not saying that Ziggy actually uses photocopied panels instead of coming up with a new one every day. I’m just saying that it would save a lot of work if it did.) 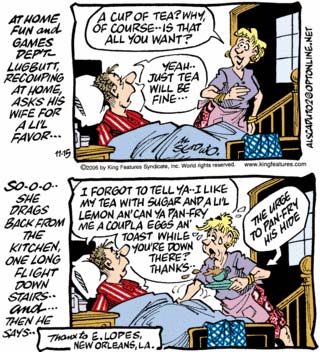 The funny thing about today’s TDIET is how quickly the cheerful scene in panel one degenerates into full-on Lockhorns-esque dysfunction. Sure, Lugbutt probably should have made up his mind about his culinary choices before he sent wifey down to the kitchen; but then, wifey’s transformation from well-coifed and cheerful to bleary-eyed and exhausted after carrying a single cup of tea up a single flight of stairs smacks of melodrama. I think she’s been nursing the urge to pan-fry Lugbutt’s hide for some time. Do it now, lady! He’s feeble and can’t run! Get the pan!

The important thing about this panel, though, is that it’s been sent in from a resident of New Orleans. Apparently, the citizens of that devastated city have been able to move on from Katrina and once again focus their attention on petty domestic drama. Of course, it’s possible that Lugbutt’s been laid low from exposure to toxic mold blooming in the walls of his flood-ravaged home. Or from cholera.

See, this is why Archie should stop wooing Veronica and stop hanging around the obscenely wealthy Lodge family: because their riches are devouring their souls from the inside out. Poor Smithers, who has no doubt served as a faithful family retainer for longer than Veronica has been alive, is not a “who” to her, but a “what.” The odd phrasing of the strip’s punchline might have made sense if at some point Lodge pater had asked “What did Archie spill it on” or some such; as it is, it’s clear that the vast class gulf between Veronica and Smithers has caused her to see him as just another piece of furniture that her family owns. Rise up in revolution, Smithers! You have nothing to lose but your chains! 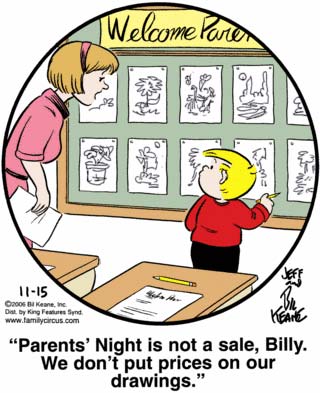 Speaking of which, Billy seems to be attending a school run by Communists.