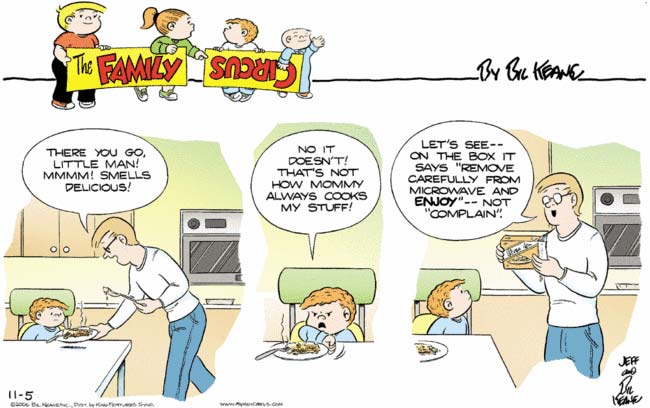 I try not to get into personal analysis of comics writers’ lives here, but it’s just so damn much fun with the Family Circus. Since thinly veiled Jeff has taken over writing duties for the thinly veiled Keane family, I’m always on the lookout for new dips in little Jeffy’s emotional roller coaster ride. Today, I have to ask: sure, it’s condescending to be referred to as “little man,” but is the look of pure unfiltered rage and disgust in panel two really called for? The microwaved whatever is made to look almost Calvin-level icky as if to try to get us on his side, but I’m thinking that anyone over the age of eight is going to identify much more strongly with Daddy, who is unflappable in the face of his little squaller’s disdain, possibly because he’s drunk.

Speaking of dad’s raging alcohol problem, since she hasn’t been tempted by Hillary Clinton to engage in some kind of anti-Christian outside-the-home economic activity, one wonders where exactly the family matriarch is at the moment, when she clearly should be whipping up some lunch from scratch for our picky redhead. Perhaps she’s finally up and left all together due to the boozin’, and this is day five of the hellish aftermath. “Hey, kid, at least your lunch is warm, OK? I’ve eaten Cheez-Its for dinner three nights in a row!”