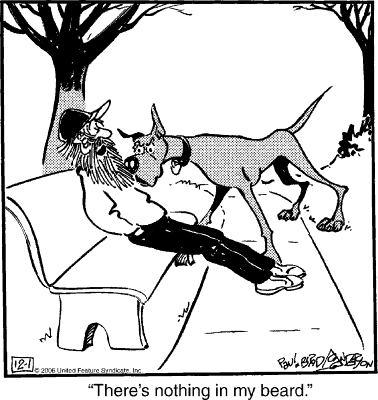 Have you ever noticed that Marmaduke is allowed to just wander aimlessly around the streets of wherever it is that he lives, more or less unmolested by the long arm of the law? Today we may be learning why: he keeps homeless people from sleeping on the benches of this bucolic suburban town. Don’t listen to him, Marmaduke! Everyone knows the hobos keep old, stale bits of food in their beards for safekeeping! Keep rooting around in there!

I’d love to see exactly what those resumes look like. “Longtime lackey seeking situation as assistant to thuggish crime lord. Skills include simpering, dodging shoes and crockery thrown in anger, Microsoft Office. References: Unfortunately all in prison and/or incinerated.”

Good lord, can’t these kids engage in a little bit of childish fun — like lowering a head-sized slice of cake down from a treehouse — without every carbon-based form of life in the neighborhood staring at them with blank, expressionless faces? I’d be pretty creeped out if I were them. The dude with his nose over the top of the fence is particularly disturbing.

Crankshaft proves that, like its sister strip Funky Winkerbean, it too can bring the gut-churning bleakness. I love the expressions in the second panel: Everyone, particularly the young alterna-teen, seems angry and humiliated by the ‘shaft’s antics, and the old coot’s own face indicates that he’s all too aware that his own family mainly sees him as an embarrassment. This should be a fun dinner. The only bright spot is the hostess, who appears to have been charmed Crankshaft’s little joke. Maybe this is the first time she’s heard it, which means that she’s probably been working there for less than forty-five minutes.