You know, if the world around me had suddenly disappeared in a puff of smoke and I found myself on a higher plane, face to face with a benevolent, all-powerful deity who offered me a chance to come up with a definitive catalog of horrifying, traumatic things that, thanks to His all-loving power and favor, I would never, ever have to look at, it would never even have occurred to me before today to add “bald Sally Forth” to the list; and if such a blessed event ever happens to me in the future, there’s really no point, since I can never unsee it.

I like to imagine that Sally’s hair just came off in one immobile unit, with her classic freakish hairstyle undisturbed despite its separation from her head, and that somewhere a cancer survivor who tried to save a few bucks is kind of peeved with that decision. 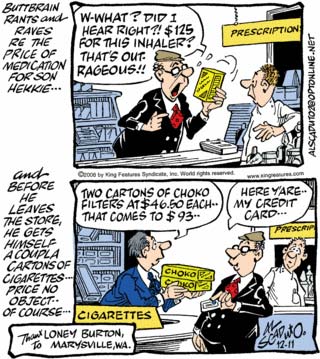 TDIET, tired of wasting its petty rage on intergenerational squabbles and marital discord, has decided to wade into the public health arena. I’d just like to point out that any establishment that sells cigarettes in bulk mere feet away from its inhaler stand isn’t just laying the groundwork for classic funny-pages irony; it’s also destined to make money hand over fist, as consumption of the former inevitably necessitates the purchase of wares from the latter for the customer and all those who share airspace with him. That’s what we call synergy, folks.

You know, usually Monday soap strips are boring, since they need to just rehash what happened Sunday, but I think we deserve a double shot of Celeste’s magnificient wrath. I do appreciate the appearance of Officer Flattop McMustache in the second panel; his slack-jawed, panicked face tells us that nothing in his police academy training, or his years as a U.S. Marine before that, could have prepared him for this. Hopefully tomorrow’s strip will feature less petition filing and more tasering.